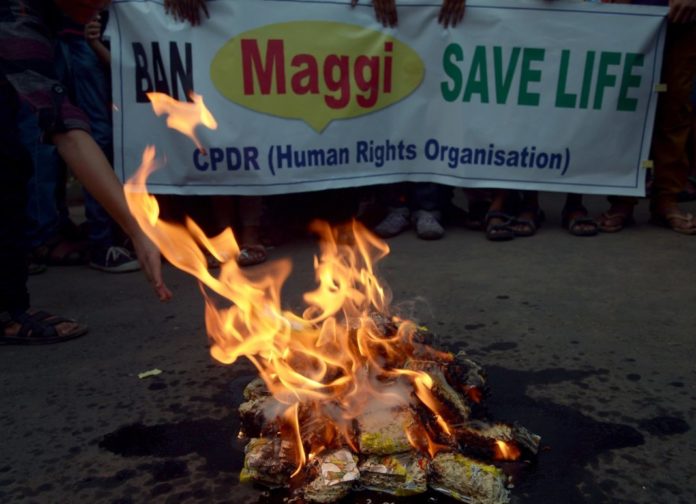 Nestlé spent three decades building a beloved noodle brand in India. Then the world’s biggest food and beverage company stumbled into public relations debacle that cost it half a billion dollars.   — Fortune

In May 2015, a packet of Nestlé’s hugely popular 2-Minute Maggi noodles had been found to contain seventeen times the permissible level of lead and harmful levels of monosodium glutamate (or MSG, a flavour enhancer which was not mentioned in the product’s list of ingredients) in Uttar Pradesh (a state in northern India).

In June 2015, the Food Safety and Standards Authority of India branded Maggi noodles as ‘unsafe and hazardous for human consumption’.  Subsequently, the central food regulator imposed a five-month ban on the sale, storage and manufacturing of Nestlé’s fastest-selling food item in India. It also ordered Nestlé India to recall all the available stock of Maggi noodles from about 3.5 million outlets across the country with immediate effect.

Maggi noodles, which accounted for roughly a quarter of Nestlé nearly $1.6 billion sales in India, returned to stores in November following clearances by the Bombay High Court. Nestlé was not only directed to remove the “No Added MSG” label from the Maggi noodles packets, the company was mandated to conduct external and internal tests on almost 3,500 samples of the product to show the fresh batch contained lead levels well within the limits specified by food regulations.

However, by this time Nestlé India had been hit hard by the Maggi setback. In June itself, Nestlé India’s shares fell down 11% over concerns related to its safety standards. The Maggi recall led to an overall fall in shares by 15 %.

Following the ban, Nestlé immediately took a hit of INR 4.5 billion as it was forced to destroy more than 27,000 tons of Maggi noodles. Maggi’s share in the Indian instant noodles market fell to 42% in January 2016 from a dominant 77% in January 2015.

Nestlé India recorded its first ever loss. The company, which follows a January-December financial year, reported a decline of 17.2% in its net sales for the year ended December 31, 2015 on account of the Maggi ban. Net profit for the year fell to INR 5.63 billion from INR 11.85 billion in the previous year.

In a statement announcing the financial results, Nestlé India Chairman Suresh Narayanan stated “the impact of the Maggi crisis extended to not just factories and employees but also partners, suppliers, farmers, retailers and customers”. Analysts at Fortune reported:

Nestlé lost at least $277 million in missed sales. Another $70 million was spent to execute one of the largest food recalls in history. Add the damage to its brand value — which one consultancy pegged at $200 million — and the total price tag for the debacle could easily be more than half a billion dollars. And the fallout continues.

Nearly a year after the ban, Maggi noodles are back on shelves in India, but Nestlé India may take 3 more years to recover from the economic and social aftershocks. With sales drops, product recalls, and the damages paid, the Maggi disaster has taught the company a costly lesson.

This article (Nestlé Loses More Than $500 Million For Poisoning Maggi Noodles With lead) is free and open source. You have permission to republish this article under a Creative Commons license with attribution to the author and AnonHQ.com.