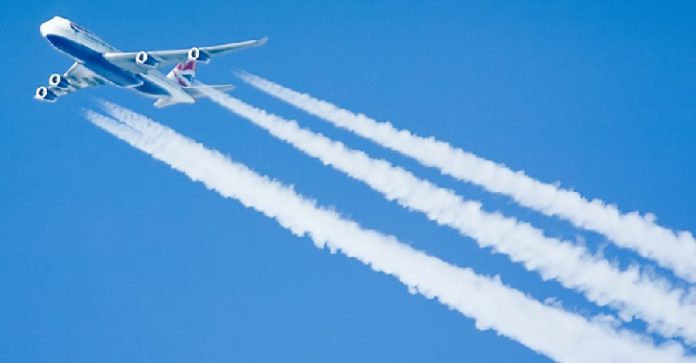 San Francisco, CA. — Chuck Long is a researcher with the Cooperative Institute for Research in Environmental Sciences (CIRES) at the NOAA Earth System Research Laboratory at the University of Colorado in Boulder. At the recent American Geophysical Union Fall Meeting, Long and his team released their paper, “Evidence of Clear-Sky Daylight Whitening: Are we already conducting geoengineering?” The analysis found that vapor from airplanes may be altering the climate through accidental geoengineering.
According to a 2013 congressional report:

“The term ‘geoengineering’ describes this array of technologies that aim, through large-scale and deliberate modifications of the Earth’s energy balance, to reduce temperatures and counteract anthropogenic climate change. Most of these technologies are at the conceptual and research stages, and their effectiveness at reducing global temperatures has yet to be proven. Moreover, very few studies have been published that document the cost, environmental effects, socio-political impacts, and legal implications of geoengineering. If geoengineering technologies were to be deployed, they are expected to have the potential to cause significant transboundary effects.
“In general, geoengineering technologies are categorized as either a carbon dioxide removal (CDR) method or a solar radiation management (SRM) method. CDR methods address the warming effects of greenhouse gases by removing carbon dioxide (CO2) from the atmosphere. CDR methods include ocean fertilization, and carbon capture and sequestration. SRM methods address climate change by increasing the reflectivity of the Earth’s atmosphere or surface.

“Aerosol injection and space-based reflectors are examples of SRM methods. SRM methods do not remove greenhouse gases from the atmosphere, but can be deployed faster with relatively immediate global cooling results compared to CDR methods.”
Long and his team were investigating the changing amounts of sunlight that reach our planet, processes known as “brightening” or “dimming.” According to CIRES, “Brightening and dimming are overly simplified words that signify increases and decreases in how much light from the Sun (measured as “irradiance” in watts/m2) reaches the planet’s surface — and these measurements are often analyzed under cloud-free conditions.”

In the new study, Long suggests high-altitude “ice haze” may be responsible for a whitish tint to the blue sky. “I’m talking about a sub-visual contrail-generated haze of ice, which we do not classify as a cloud but gives blue sky more of a whitish tint,” Long told CIRES.
“Contrail” is the name for the thin, line-shaped “clouds” sometimes produced by aircraft flying at altitudes several miles above the Earth. The trails are produced from water, turned into ice crystals, and can last several seconds, minutes, or possibly hours. These crystals leave behind a thin, icy haze, scattering the sun’s light in a way similar to Solar Radiation Management geoengineering projects. Long’s research may prove geoengineering is already taking place, albeit inadvertently.
More research is needed before Long can conclusively show much of an effect contrails are having on the climate, or whether they are leading to cooling or warming. However, Long says this is another way humans are altering the climate and, he says, “you can see this with your own eyes.”

One reason this story is peculiar relates to the controversy over whether geoengineering programs are already active. This is what is derogatorily called the “Chemtrails Conspiracy.” Essentially, some believe geoengineering is actively taking place in our skies, and the “contrails” are actually geoengineering programs covertly being carried out. The “chemtrails” label comes from the portion of the crowd that believes these programs are delivering dangerous chemical additives to the food, water, soil, and humans below for nefarious purposes.
Regardless of where you stand, it’s important to know the United States government has a history of weather modification. In a 1996 document entitled “Weather as a Force Multiplier: Owning the Weather by 2025,” the U.S. Air Force discussed a number of proposals for using weather as a weapon. The Environmental Modification Treaty was signed by the United States and other nations to halt global weather modification.

But the government did not simply research these ideas. It actually implemented them — prior to its official musings on whether it could. During the Vietnam War, the U.S. government operated covert weather modification programs under Operation Popeye. The government does not only experiment with technology in foreign countries; it likes to try it at home, as well. In 2012, it was revealed that the U.S. Army sprayed toxic chemicals over the skies of St. Louis without informing the public.
Anti-Media also recently reported on Professor Alan Robock’s theory that the Central Intelligence Agency is using the weather as a weapon of war.
So are geoengineering programs already active? Perhaps what Chuck Long and his team are noticing is not that standard contrails are causing geoengineering, but that geoengineering programs are already live and changing the climate.

Indeed, at least one previous study has found that geoengineering could cause the white haze and loss of blue skies that Long is observing. According to a report by the New Scientist, Ben Kravitz of the Carnegie Institution for Science has shown that releasing sulphate aerosols high in the atmosphere would scatter sunlight into the atmosphere. He says this could decrease the amount of sunlight that hits the ground by 20%, as well as make the sky appear more hazy.

Ironically, the promotion of geoengineering might actually cause more harm than good, including an increase in droughts. In February 2015, an international committee of scientists released a report stating that geoengineering techniques are not a viable alternative to reducing greenhouse gas emissions to combat the effects of climate change. The committee report called for further research and understanding of various geoengineering techniques, including carbon dioxide removal schemes and solar-radiation management before implementation.
The scientists found that Solar Radiation Management, or albedo-modification techniques, are likely to present “serious known and possible unknown environmental, social, and political risks, including the possibility of being deployed unilaterally.” The report was sponsored by the National Academy of Sciences, the U.S. intelligence community, NASA, National Oceanic and Atmospheric Administration, and the U.S. Department of Energy.

According to a 2013 study published in the Journal of Geophysical Research: Atmospheres, if geoengineering programs were started and then suddenly halted, the planet could see an immediate rise in temperatures, particularly over land. The study, titled, “The Impact of Abrupt Suspension of Solar Radiation Management,” seems to indicate that once geoengineering begins, the programs cannot be suspended without causing the very problem the engineering was intended to solve.
On the heels of the Paris Climate Conference, the topic of geoengineering is a contentious one. Dan Farber, professor of law at Berkeley University, recently suggested the only way the world can hope to achieve the conference’s goal of holding the global temperature decrease “well below” 2°C would be to implement geoengineering programs “such as injecting aerosols into the stratosphere or solar mirrors.”

“I’m not particularly a fan of geoengineering, and I will be happy to be wrong about this,” Farber wrote. “Otherwise, though, if we are serious about those temperature targets, we may end up with little other choice than layering some geoengineering efforts on top of aggressive emission cuts.”
What are your thoughts? Do you believe geoengineering programs are active? Do you believe they are necessary to save the planet from destruction? Leave your comments below.
This article (Scientists Say Airplane Contrails May Be Accidentally Geoengineering the Climate) is free and open source. You have permission to republish this article under a Creative Commons license with attribution to Derrick Broze and theAntiMedia.org. Anti-Media Radio airs weeknights at 11pm Eastern/8pm Pacific. Image credit: revedavion.com. If you spot a typo, email [email protected]