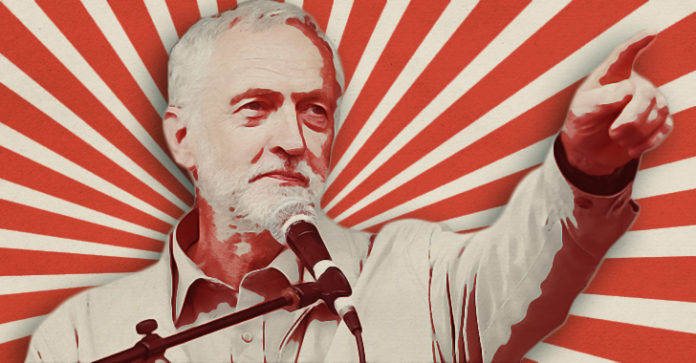 United Kingdom — In an interview with the Huffington Post marking his first 100 days as leader of the Labour party, Jeremy Corbyn has criticised the U.K. following the U.S into war — and invited Donald Trump to a British mosque.
Arriving by bicycle to a greasy spoon cafe in North London, the Labour leader discussed his life under the scrutiny of a hostile media and acknowledged the negativity of Westminster politics. Reiterating the importance of his constituency work in Islington North, where he has been MP for 32 years, Corbyn said he only spends three and a half days a week at Westminster — the rest of the time is spent away from the Parliamentary bubble.

Discussing the recent call to ban Muslims from the U.S. made by a man who commands as much media attention as himself, Donald Trump, Corbyn was frank: “The idea that somehow or other you can deal with all the problems in the world by banning a particular religious group from entering the USA is offensive and absurd.”
He added: “I hope the American people will realise that it’s against everything that’s in the U.S. constitution, it’s against everything that’s about freedom of speech, everything that’s about freedom of religion.”

Asked about the online petition to ban Trump from the U.K., he was adamant that barring him is the wrong move. Instead, he issued an invitation to the Republican candidate to see British Islam for himself, by inviting him to Finsbury Park Mosque.

“And then he can come to the synagogue afterwards. We can have a chat there. We’d go around. We manage to have a coherent, multifaith, multicultural society in London, in Birmingham, in Leicester, all parts of this country. He’s welcome to come and see. He might learn something,” Corbyn said.

A veteran campaigner against neo-colonial wars, the Labour leader has never wavered in his argument for a new type of foreign policy based on political, not military, solutions.
Asked if he would like to see an end to the special relationship between Britain and the U.S., Corbyn was clear: “I am concerned that for the past 60 years we’ve essentially followed the U.S. foreign policy all around the world.”

He added: “And with the exception of Vietnam war, in most cases we’ve got involved in either overtly or covertly supporting the USA. Not all cases, but particularly Afghanistan, Iraq, Libya, Syria. I think we’ve got to think about this, think about our interventions and think about where we go on these matters.”

Fiercely opposed to the U.K. government’s recent decision to join the U.S. and the coalition bombing of Syria, Corbyn wants a foreign policy based on international law and human rights. His foreign policy would include looking at the “fundamental issues facing the planet including environmental degradation and the largest number of displaced people and refugees ever in world history.”
“And we are not going to solve the refugee problem by electronic surveillance and razor wire. We’ve got to engage with it,” he added.
The third part of the 100 days of Corbyn interview was published on Monday evening and the lack of media coverage of his honest critique of the U.K. government’s mistakes comes as no surprise. With many left wondering when the mis-quotes will begin, you are advised not to hold your breath waiting for the demise of the U.K.- U.S. special relationship.

This article (Jeremy Corbyn Slams UK Leadership for Constantly Following US into Wars) is free and open source. You have permission to republish this article under a Creative Commons license with attribution to Michaela Whitton and theAntiMedia.org. Anti-Media Radio airs weeknights at 11pm Eastern/8pm Pacific. If you spot a typo, email [email protected]