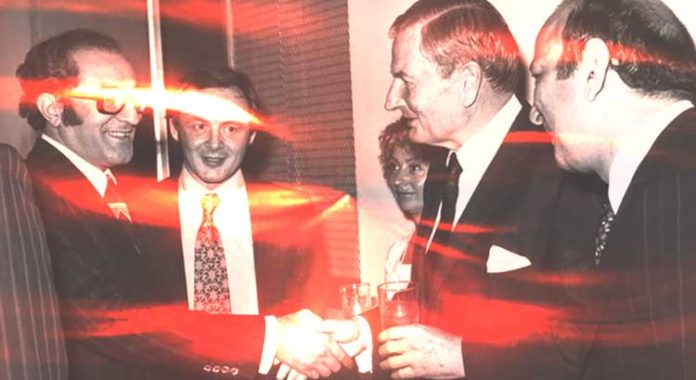 As Oxfam warns that global wealth inequality is spiraling out of control, we ask why the Rothschilds and Rockefellers are missing from the business magazine’s definitive annual guide…with some startling revelations.

“Permit me to issue and control the money of a nation, and I care not who makes its laws.“

This is a House of Rothschilds maxim, widely attributed to banking tycoon Mayer Amschel Rothschild in 1838 and said to be a founding principle for the highly corrupt banking and political system we have today.  Along with the Rockefellers, the Rothschild dynasty is estimated to be worth well over a trillion dollars. How are these powerful families linked to the ongoing crisis of global wealth inequality, why are so many people unaware of their existence, and why doesn’t Forbes ever mention them in their annual list of the world’s wealthiest people?

Global wealth inequality is out of control, and it’s no accident

In January 2014, Oxfam announced that the richest 85 people on the planet share a combined wealth of $110 trillion. The figure was based on Forbes’s rich list 2013, and it equates to 65 times the total wealth of the entire bottom half (3.5 billion) of the world’s population. While some deluded commentators welcomed this as “fantastic news,” the rest of us were disgusted. Winnie Byanyima, Oxfam’s executive director, said at the time: “It is staggering that in the 21st Century, half of the world’s population own no more than a tiny elite whose numbers could all fit comfortably on a double-decker bus.”

Two months later, following Oxfam’s calculation and having published the new 2014 rich list, Forbes journalist Kasia Morena did some fact-checking. She found that the number of billionaires owning the same as the poorest 3.5 billion had dropped from 85 to 67: which demonstrates an enormous widening of the global inequality gap in just one year.

Fast-forward to 2015, and another Oxfam investigation. The anti-poverty charity warned in January that if nothing is done to tackle global wealth inequality- by forcing corporations to pay their taxes and closing off-shore tax havens, for example- the richest 1% will own more than everybody else in the world combined by 2016. In a paper called Wealth: Having it all and wanting more, Oxfam outlined how the richest 1 percent have seen their share of global wealth increase from 44% in 2009 to 48% in 2014, and will likely surpass 50% in 2016. Winnie Byanyima again warned that the explosion in inequality is holding back the fight against global poverty at a time when one in nine people do not have enough to eat, and more than a billion people still live on less than $1.25 a day.

The organization also outlined how 20 percent of billionaires around the world have interests in the financial and insurance sectors, a group that saw their cash wealth increase by 11 percent in the last 12 months. Billionaires listed as having interests in the pharmaceutical and healthcare sectors saw their collective net worth increase by 47 percent, and the industry spent more than $500 million lobbying policy makers in Washington and Brussels in 2013 alone.

“Do we really want to live in a world where the one percent own more than the rest of us combined?” Byanyima asked. “The scale of global inequality is quite simply staggering, and despite the issues shooting up the global agenda, the gap between the richest and the rest is widening fast.”

Here is Forbes’s (real-time) list of the 66 billionaires who (officially) own half of all global assets, and will soon own more than the rest of Earth’s seven billion population combined. They range from CEOs of large corporations to oil and gas tycoons and Silicon valley entrepreneurs. The list details name, net worth, percentage change since the 2015 results, their age, industry and nationality. Bill Gates is ranked first at $469 billion, and James Simons at #66 with the $14 billion he made from hedge funds.

But where are the world’s Royal families? And more to the point, where are the Rothschilds and the Rockefellers? These two families have an unimaginable amount of wealth that surpasses the trillion mark- they are the only trillionaires in the world, and yet they are missing from Forbes’s list every single year, along with the handful of other men commonly believed to own ourpoliticians, our media, our corporations, our scientists, and even our money supply.

Forbes’s rich list doesn’t include members of Royal families or dictators who hold their wealth through a position of power, or who control the riches of their country. In this way, the real people pulling the strings are able to work in absolute secrecy without any media attention at all (unless it is carefully-constructed positive propaganda, like this article on the philanthropy of the Rothschilds, of course). Forbes’s policy to exclude heads of state from the rich list explains why the Queen of England is absent, although nobody has the slightest idea of her wealth in any case: her shareholdings remain hidden behind Bank of England Nominee accounts. As the Guardian newspaper reported in May 2002: ‘The reason for the wild variations in valuations of her private wealth can be pinned on the secrecy over her portfolio of share investments…Her subjects have no way of knowing through a public register of interests where she, as their head of state, chooses to invest her money. Unlike [British politicians and Lords], the Queen does not have to annually declare her interests and as a result her subjects cannot question her or know about potential conflicts of interests…’

The same can be said for the Rothschilds and Rockerfellers, whose European forebears were richer than any Royal family at the time. The families are believed to have set up and own the Federal Reserve (G Edward Griffin’s The Creature From Jekyll Island and this research by journalist Dean Henderson are recommended reading if you want to get deeper into this topic). Could this be why the families, whose power in manipulating global affairs for the past few hundred years cannot be underestimated, are protected by Forbes’s ‘don’t even go there’ policy? Retired management consultant Gaylon Ross Sr, author of Who’s Who of the Global Elite, was apparently told in 1998 that the combined wealth of the Rockefeller family was approx $11 trillion and the Rothschilds $100 trillion…what might that figure have reached 17 years later? One can hardly begin to imagine, but maybe money isn’t the most important thing to your average trillionaire, anyway…

“The only problem with wealth is, what do you do with it?” was a rhetorical question posed by none other than John D. Rockefeller. Well, if Aaron Russo’s testimony is to be believed, all the Rockefeller riches in the world certainly won’t be used to benefit the human race…

Russo, a film-maker and activist who directed America: From Freedom to Fascism, claimed that Nick Rockefeller told him about ‘an event that would allow us to invade Afghanistan and Iraq’ some eleven months before 9/11, and foretold the fact that the ‘War on Terror’ would be a hoax wherein soldiers would be looking in caves for non-existent enemies (see video). In the interview, Russo claims that he first met lawyer Nick Rockefeller after being introduced by a mutual attorney friend. The two men hit it off, and later down the line Rockefeller apparently confided in Russo privately what his family had planned for the world: never-ending war, global population reduction, economic collapse, widespread chaos and disorder on such a scale that people would actually welcome the ultimate ‘solution’: a one-world government. He was speaking in October 2000, and most of his predictions have now come to pass- including 9/11 and the subsequent War on Terror.

Russo claimed that Rockefeller asked him to be on the Council For Foreign Relations (CFR), but the man who spent his career fighting for freedom and exposing the Fed Reserve supposedly told Rockefeller that he couldn’t possibly go along with these sinister plans for mankind. “As much as I like you Nick, I don’t believe in enslaving people. We’re on opposite sides of the fence,” Russo told Nick. To which Rockefeller apparently replied: “Why do you care about those people? Take care of your own life; do the best you can for you and your family.” Russo concludes: “There was just a lack of caring; it was just cold.”

He goes on, “I used to say what the point, Nick? You have all the money in the world, you have all the power in the world, whats the end goal?” Rockefeller is said to have responded bluntly: “To get everyone chipped.” According to this theory, the families who own the banking system are bored of their wealth, it is no longer enough. To control society itself is the ultimate end-game. According to Russo, Rockefeller told him that a global government would slowly phase out paper money from circulation, with its eventual aim being to microchip the population, turning us all into slaves of the NWO.

These are wild claims indeed, and from a journalistic point of view, they cannot be verified one way or the other. But it’s worth noting that just before Russo died in August 2007, he filmed a moving message to all Americans. In it, he talked about how vital it is for people to continue to resist national ID cards and microchips, and fight for their individual freedoms against those who would enslave us. It’s also worth pointing out that it’s not only activists like Russo and scare-mongering patriots like Alex Jones who have tried to ‘out’ the Rothschilds and Rockefellers. The problem is, all those who do so are silenced.

Ashley Mote, a member of the European Parliament serving British independence party UKIP, asked the following question in Brussels, and retribution was swift: “Mr President, I wish to draw your attention to the Global Security Fund, set up in the early 1990s under the auspices of Jacob Rothschild. This is a Brussels-based fund and it is no ordinary fund: it does not trade, it is not listed and it has a totally different purpose. It is being used for geopolitical engineering purposes, apparently under the guidance of the intelligence services. I have previously asked about the alleged involvement of the European Union’s own intelligence resources in the management of slush funds in offshore accounts, and I still await a reply. To that question I now add another: what are the European Union’s connections to the Global Security Fund and what relationship does it have with European Union institutions?”

This is exactly the kind of question the European public would like an answer to. Yet Mote did not receive one. Instead, the 79 year old politician was sacked from his own party, and later arrested and sent to jail for allegedly claiming false expenses during his time as an MEP. Mote claimed throughout his trial that he was ‘targeted for being anti-Europe’, and said the money he claimed was used to pay third-party whistleblowers in a quest to uncover corruption and fight for democracy and transparency in European politics.

Like everything else relating to the people who really run the show, the truth is out there…but it’s almost impossible to pin down.

This article (Secrets Of The Elite: Why Forbes’s Rich List Doesn’t Include The Wealthiest Families On The Planet) is free and open source. You have permission to republish this article under a Creative Commons license with attribution to the author and TrueActivist.com.