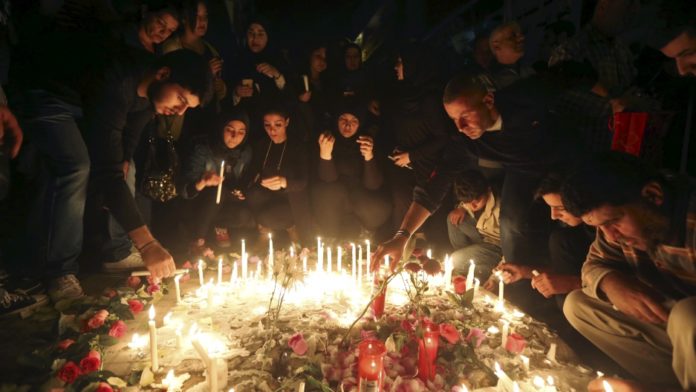 “It’s not just Paris we should pray for, it is the world”.

Islamic State militants killed at least 41 and severely injured 239 others in two suicide bombings in Beirut hours before they killed and maimed hundreds in Paris. The bombing was the deadliest in the capital since the end of Lebanon’s civil war in 1990. The Paris massacre was the deadliest attack in France since World War II.

“They targeted civilians, worshippers, women and the elderly. It only targeted those innocent people. This is a satanic terrorist act, carried out by apostates,” Hezbollah MP Bilal Farhat told AP.

“There’s a lot of shattered glass on the street, a lot of blood, and it’s really just a scene of chaos and carnage,” journalist Tamara Qiblawi told CNN shortly after the blasts.

While the world leaders called the terror strike in Paris an “attack on humanity and humanitarian values”; the world was “united to condemn terrorism”; there was social media outrage so much so that Facebook users were given the option to change their profile pictures to support France and the people of Paris; and mainstream media provided blanket 24-hour coverage of the event working overtime to report the minutest of details and flurry of emotions from ground zero, the massive terror attack in Beirut was ignored – by the very “humanity” that stood in solidarity with people of France. The bombings in Lebanon drew no tweet or statements from world leaders, no social media outrage, no 24-hour mainstream media coverage, and no global messages of solidarity and compassion with people of Lebanon.

The world and the media not just ignored the attack on humanity in Beirut, it also failed to notice a hero – Adel Termos – who made a split-second decision that saved countless lives. Termos was at the market with his young daughter. Neither of them survived.

“He tackled him to the ground, causing the second suicide bomber to detonate. There are many many families, hundreds of families probably, who owe their completeness to his sacrifice.”

RIP Adel Termos who sacrificed himself by tackling a suicide bomber preparing to kill 100s in Lebanon pic.twitter.com/Mjz28LtzOT

A politically incorrect blog by Joey Ayoub hit hard at our selective grief and outrage and double standards to bring home a point:

‘We’ don’t get a safe button on Facebook. ‘We’ don’t get late night statements from the most powerful men and women alive and millions of online users.

‘We’ don’t change policies which will affect the lives of countless innocent refugees.

This could not be clearer.

I say this with no resentment whatsoever, just sadness.

Indian blogger Karuna Ezara Parikh responded to Beirut terror attack with a poem that has since gone viral:

It’s not Paris we should pray for, it is the world. It is a world in which Beirut, reeling from bombings … is not covered in the press. A world in which a bomb goes off at a funeral in Baghdad, and not one person’s status update says ‘Baghdad’ because not one white person died in that fire…

Will your sails be lit in Red, White and Green tonight, in solidarity with the people of #Lebanon @SydOperaHouse? pic.twitter.com/4VskGQ2VlS

This Google Trends graph shows the bias – and what’s wrong with us – perfectly:

UPDATE: In a Facebook post, Vice President of Growth Alex Schultz sought to tamp down criticism for rolling out the Safety Check feature for Paris and not for Beirut. Alex, however, couldn’t explain activating the color option for Profile pictures for Paris but not for Beirut.

Yesterday, we activated Safety Check in Paris so that people there could let their friends and family know they were…

Meanwhile, Israeli forces shot over a hundred Palestinians during West Bank and Gaza demonstrations the same day ISIS attacked Paris. According to Ma’an, Israeli forces “used rubber-coated steel bullets and 0.22 caliber bullets against the main instigators” after demonstrators in the occupied Palestinian territory and inside the neighboring Gaza Strip refused to halt. The news is nowhere on the mainstream or social media. Aren’t Palestinians counted as humans?

This Article (Selective Grief & Outrage? ISIS Killed Over 40 In Beirut Hours Before Attacking Paris) is free and open source. You have permission to republish this article under a Creative Commons license with attribution to the author and AnonHQ.com.