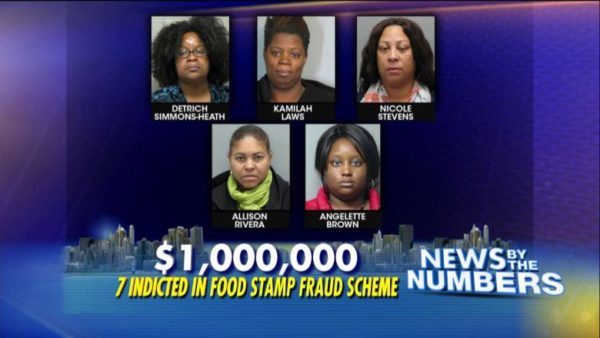 In the Mid-Atlantic state of Delaware in the United States, seven former social workers have been indicted for stealing more than $959,000 in federal funded Electronic Benefits Transfer (EBT) cards.

The indicted employees’ were put before a court of law after an internal audit at the Delaware Department of Health and Social Services. The audit revealed the employees’ had used a clandestine means to divert funds intended for welfare in the state, into their private pockets. All seven charged, are women.

Delaware’s state Attorney General, Matt Denn said the former social workers created accounts for the fictitious Supplemental Nutrition Assistance Program (SNAP) recipients, using some of the accompanying payment cards themselves while selling others for less than the amount of funds in each account. The Libertarian Republic reports that SNAP is the 21st-century equivalent of food stamps, with roots in the Agriculture Adjustment Act of 1933 and the Food Stamp Program of 1939; both initiatives implemented by President Franklin Delano Roosevelt (FDR).

The current welfare system in America was pioneered by FDR, who served from 1933 to 1945. FDR focused mainly on creating jobs for the masses of unemployed workers at the time. Therefore, he is credited by historians as the first sitting president of the United States to back federal aid for poor children and other dependent persons. Under his watch, a national welfare system was established for the first time in the United States history, in 1935.

According to the Libertarian Republic, in 2015, the United States federal government spent about $75 billion on the SNAP program, and another $2.4 billion on similar programs.

EBT cards, which transfer funds directly from a federal account to retailers’, were instituted to reduce the fraud and misuse associated with paper food stamps, as well as distribute various cash benefits. In April 2016, two of the employees, Allison Rivera and Angelette Brown were convicted and sentenced to two years of probation. The court ruled that they took a total of nearly $44,000, which they must repay. Another one, Nicole Stevens, took over $8,000. The court is yet to rule on her case.

The others include Detrich Simmons-Heath, Kamilah Laws, Jo Ellen Edwards, and Shirlene Davis. They are facing serious charges ranging from forgery to stealing over $100,000 each. Investigators are still searching to arrest Jo Ellen and Shirlene. They have been charged in absentia with first degree forgery, falsifying business records and official misconduct.

The News Journal reported in 2014 that around 17% of people living in Delaware were receiving food benefits. The figure was higher than the national estimate of 14.5% at the time. Investigators turned their attention on the state, leading to the internal audit. The corruption by the former workers standing trial has shocked observers and politicians, calling for the program to be privatized.

The Libertarian congressional candidate and state party chairman, Scott Gesty said corruption in the program would be less likely if private organizations were either responsible for distributing the cards, or providing the charity itself. He also questioned the length of the investigation into the case and the number of agencies involved, revealing that private entities are much more streamlined and have tighter internal controls than state agencies.

“State-run programs that handle dollars that aren’t earned, but are just handed to them by the Feds, are just more likely to have theft and corruption involved. Privatizing the system would go a long way in preventing this type of thing from happening,” Mr Gesty concluded.

This article (Seven Social Workers Steal Nearly $1 Million Meant for Food Benefits in Delaware, Now Facing the Law) is a free and open source. You have permission to republish this article under a Creative Commons license with attribution to the author and AnonHQ.com.