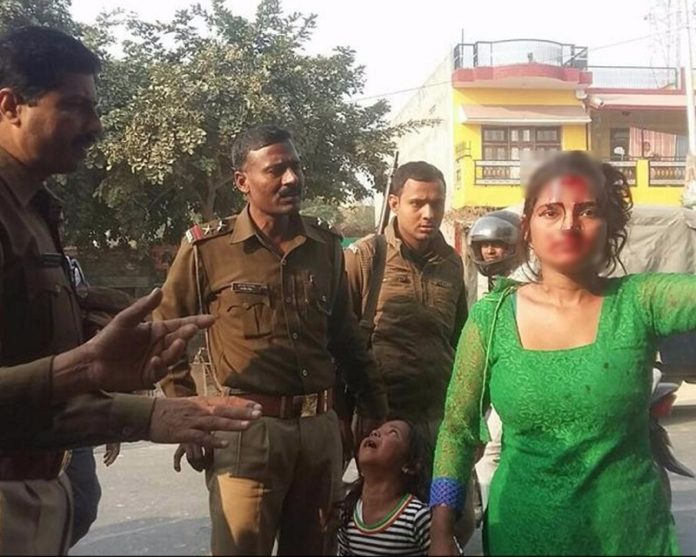 In a shocking incident, two goons attempted to grope a mother of two when she asked for directions in the middle of a busy market in a small town in the East Indian district of Mainpuri. When she resisted the sexual assault, the woman was repeatedly beaten mercilessly in broad daylight with a stick aimed at her head, back and shoulder. The woman’s husband was also struck while her young daughter witnessed the horrific incident, howling as it took place.

“I was asking a few persons about Ajay’s shop, but they said that come inside with us, we will tell you. I asked him to talk with respect. But he started abusing us and started fighting. The person used a stick to beat my husband, but hit me instead,” the victim, who threatened to shoot herself if the culprits were not arrested, told Asian News International.

One of the attackers has been arrested and an investigation is underway to find two more assaulters in connection with the gruesome incident. Sunil Saxena, Superintendent of Police, told the media:

“We have taken the preventive action by arresting the accused. The accused was arrested within hours of the incident and after that a special team has been made to arrest the remaining culprits. We have made a team which includes the surveillance team and sub-inspectors. I am monitoring that; soon we will complete the remaining proceedings.”

Viral videos, which have emerged from the home turf of Uttar Pradesh Chief Minister Akhilesh Yadav’s father Mulayam Singh Yadav, show the woman in a brawl with a group of men; when another man approaches with a large stick and proceeds to strike her with it.

One of the attackers, identified as Anand Yadav, also hurled abusive language against the woman (who is reported to have sustained severe head injuries) after he forcibly removed her head covering. The woman can be seen bleeding; ironically, the bystanders were busy recording the assault but no one tried to help the couple.

Uttar Pradesh is heading for elections in less than three months; the videos have been seized by opposition parties as proof that neither the ruling party (led by the CM’s father) nor the CM are doing enough to tackle criminal elements who have a free run in the State.

“There is a complete breakdown of law and order. The chief minister can launch as many new schemes as he wants, but till the police and people are scared of unruly elements who have state protection, nothing will work,” frowned Vijay Bahadur Pathak, a senior BJP leader.

#india, a land that #worship #cows but #rape, #beat women in public. Ashamed to call myself an #Indianhttps://t.co/gFhWkJu8df

In early December, a 10-year-old schoolgirl, playing outside her home in the East Indian district of Seraikela-Kharsawan, suffered burns to 60% of her body after two unidentified men poured kerosene on her, set her on fire, and threw her in a dried well for resisting rape and trying to escape.

Despite public outrage and changes in legislation, sexual harassment against women is a cause for concern in India. Although the figures are not an accurate representation of the scale of the crisis, at least 34,651 cases of rape were reported across India last year, while 4,437 cases of attempted rape were reported in 2015.

This article (Sexual Predators Brutally Beat Woman with Stick for Resisting Molestation [VIDEO]) is free and open source. You have permission to republish this article under a Creative Commons license with attribution to the author and AnonHQ.com.