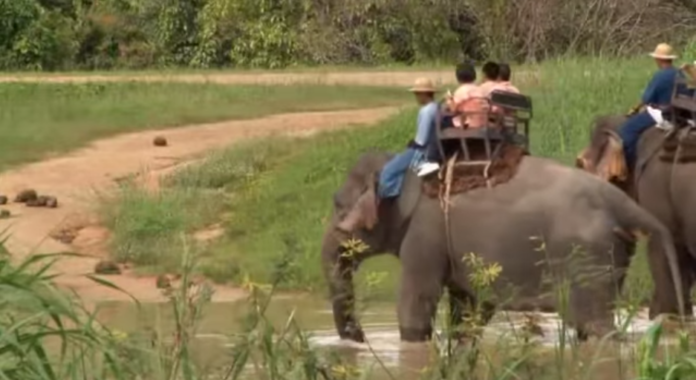 The majestic elephant is the largest land mammal on earth, so it is hardly surprising that riding these extraordinary creatures is a popular tourist attraction in Thailand. The reason for this is likely that the majority of people are still unaware that animals within these attractions are brutally taken from their homes in the wild, mistreated, and often abused for no purpose other than profit. It is also widely unknown that riding an elephant can cause serious long-term damage to their spines, although this is difficult to believe considering their extraordinary size, their spines are simply not built to withstand the weight of humans.

Considering that elephants are regarded as symbols of the king’s divine right to rule, of good luck and are even seen as religious icons, the manner in which they are treated suggests that the animals are not respected.

Sangduen “Lek” Chailert, a well-known Chiang-Mai-based activist and founder of the Save Elephant Foundation said, “The people believe that to control the animal they have to do something to make the elephant feel fear and pain”.

Avid traveler Matthew Karsten, wrote on his blog The Expert Vagabond “Wild elephants won’t let humans ride on top of them. So in order to tame a wild elephant, it is tortured as a baby to completely break its spirit. The process is called Phajaan, or “the crush”. It involves ripping baby elephants away from their mothers and confining them in a very small space, like a cage or hole in the ground where they’re unable to move,” after journeying to an elephant nature park.

We urge you to watch this video; it shows how elephants are treated in Thailand for both the tourism and logging industry.

Unfortunately, the tourists fueling this industry are naive to the practices and methods used to ‘control’ these animals. If more people were aware of how these animals were captured, tamed and abused they would likely not support or partake in the attraction. Young elephants can be trained much quicker and easier than adults. Therefore, babies are more likely targets in the wild. The babies, ripped from their mothers, are starved for days, beaten with clubs and stabbed with sharp bull hooks.

Experts have estimated that there are less than 2000 wild elephants living in Thailand, compared to the 4000 believed to be in captivity within the country. Although the species’ populations has rapidly declined because of a combination of factors, including destroyed habitats and poaching, the tourism industry is also a large contributor to the problem. Because of humans, Asian elephants are now among the many other endangered species on the planet.