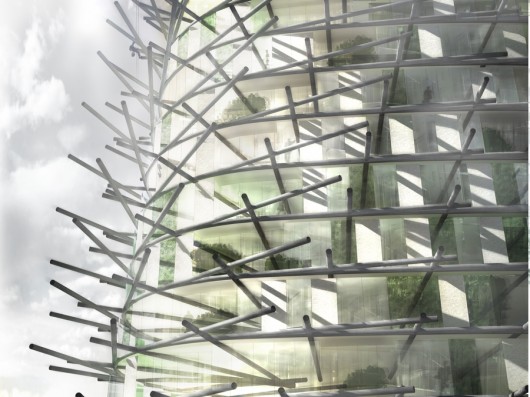 Green structures and buildings are a growing trend. Vertical residences like the Clearpoint Residencies apartment block in Sri Lanka and The Living’s Hy-Fi organic sculpture in New York are two examples. Now, Chartier-Corbasson from France has designed a concept for a skyscraper that would be built the recycle waste of it’s occupants.

The Organic London Skyscraper concept sought to show how the financial outlay required to build a skyscraper could be moderated. The idea proposes that the paper-and-plastic waste created by the existing residents/tenants of a building could be recycled and used to create panels for it’s continued construction. The building would grow using the waste of it’s residents and Chartier-Corbasson suggests that enough materials could be collected within a year to create the building’s facade.

To minimize costs and make cash flow more manageable, the proposal calls for waste materials to be collected and sorted within the building, which would then be re-fabricated on-siteinto construction panels. In addition, the quicker that vacant spaces within such a building are taken, the quicker the construction would be completed due to the increased amount of recyclable waste being produced. In this way, the building is actually “self-regenerating.” The designers say that it’s hollow tubes would reduce wind impact and would contain small wind turbines to generate electricity,in order to contribute to the building’s energy needs.

The pyramid-shaped building would allow for access to different levels by way of an elevator. Chartier-Corbasson says that there would be enough access via elevator to make way for a tower crane. The building’s design includes landings, lobbies and spaces for areas like gyms,conference rooms, restaurants, bars and even observation platforms.