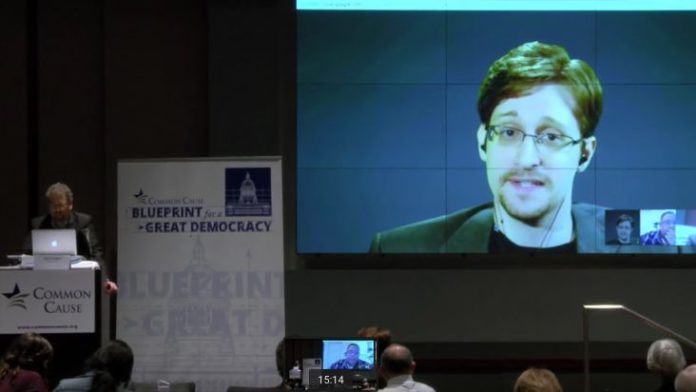 It was all a ruse; a misdirection; solid bovine excretion; less colorful ways of expressing what Edward Snowden had to say about the FBI’s claim that only Apple could bypass the security on the San Bernardino Shooter, Syed Rizwan Farrook’s iPhone.

The FBI had previously persuaded a federal judge to issue a ruling which would force Apple to write code that would create a backdoor through its own security. Apple is, for now at least, apparently standing its ground against the ruling.

“The FBI says Apple has the ‘exclusive technical means’. Respectfully, that’s bullshit,” Snowden said via internet video conference during the Common Cause discussion, called the Blueprint For A Great Democracy.

The full video of the conference, titled “A Conversation on Surveillance, Democracy, and Civil Society”:

The global technological consensus is against the FBI. Why? Here’s one example: https://t.co/t2JHOLK8iU #FBIvsApple https://t.co/mH1ZXOOQ1E

In the above tweet, Snowden also pointed to an article by the American Civil Liberties Union, which detailed how the FBI could have circumvented the iPhone’s security features without forcing Apple to do it for them. The article explains that “all the FBI needs to do to avoid any irreversible auto erase is simply to copy that flash memory (which includes the Effaceable Storage) before it tries 10 passcode attempts. It can then re-try indefinitely, because it can restore the NAND flash memory from its backup copy.”

Indeed, it is surprising that the FBI (and especially its deafeningly silent tech-savvy buddy the NSA) was facing so much difficulty; security researchers have proposed several viable solutions such as “de-capping” the memory chip so that it can be accessed outside of the iPhone. Or resetting the iPhone’s internal password attempt counter, so that its counter would automatically be reset to 1, thus investigators would not be limited to a fixed number of attempts to guess the password.

“De-capping” however is risky – requiring great care to avoid damaging the chip. Both methods are expensive and time-consuming. Nonetheless, these techniques have been applied successfully before.

Apple has been the target of the NSA for at least 10 years now. Snowden himself had revealed that the NSA had/has the ability to remotely take full control of a person’s iPhone via a Smurf-themed suite of tools. Even the current state of an iPhone’s security is questionable, given the fact that the NSA whistle-blower himself, doesn’t use an iPhone for this very reason.

That the NSA has not had much to say on the matter, seems to indicate that the FBI might be purposely excluding it. It might be looking to gauge how much it could get away with in the name of terrorism, or it could be looking to conceal the full extent of the NSA’s current abilities.

(On a mostly-unrelated side-note, it is interesting to see Donald Trump take the government’s side on the issue in February by calling for a boycott of Apple products, while, according to Apple Insider Apple CEO Tim Cook- who was most vocal about this mess- met up in a top-secret retreat with government elite to discuss Trump.)

This article (Snowden: FBI Claim that only Apple can Unlock Terrorist’s Phone is “BULLSH**””) is a free and open source. You have permission to republish this article under a Creative Commons license with attribution to the author(CoNN) and AnonHQ.com.