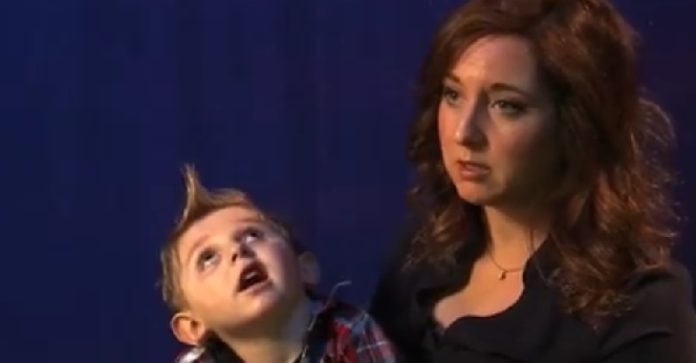 (TRUTHINMEDIA) Katie Harrison loves her little guy, Hawk. Life is hard for this little guy: when Hawk was just weeks old, he suffered a brain hemorrhage, followed by a seizure that led to a blood clot disorder, a feeding tube and vision impairment.

But Hawk’s life has been getting better thanks to cannabis oil, which he has been taking three times a day for months. It started when Katie traveled to California to see what cannabis oil could do for her son.

“We just saw instantly a huge difference, the light behind his eyes, his awareness of what else was in the room…and he could see other people and he was aware,” Harrison said.

For Harrison, cannabis oil is a miracle.

There is just one problem with this miracle. Access to this miracle is crime. Cannabis oil, or CBD, comes from cannabis plants which can’t legally be grown here in Georgia.

But a bill in the Georgia House aims to expand the number of conditions that can be treated with cannabis oil, and it would have allowed more THC, the chemical in cannabis that can get you high, to be incorporated into medicine.

“THC (A) would be legal, which is the acid form of THC, before you heat it up and decarboxylase it. That’s something that Hawk takes, so that would help us,” Harrison said.

And the bill would have allowed cannabis oil to be cultivated here in Georgia. But while making its way through the Georgia House it was stripped down completely, making it tough for thousands of parents like Harrison to offer their kids relief.

“It’s just such a tiny piece of legislation when you do that, when you limit it so much, when you could be helping so much more. It seems like another cowardly act,” Harrison said.

For Harrison, her hope now resides in stories like these. Stories that explain to people that CBD oil isn’t kids smoking marijuana, but medicinal oil that is transforming children and adults who suffer from various conditions from epilepsy to cancer, and PTSD.

Harrison has made it her mission to keep fighting and to educate people about the wonders of CBD oil.

“As they hear Hawk’s story…you sort of see their face change, like, ‘oh, ok when you explain it that way’ or ‘when you really break it down, I understand it better now,’ then they’re more for it,” she said.

This article (Mother Becomes a Criminal to Save Her Son’s Life With Cannabis Oil) originally appeared on TruthInMedia.com and was used with permission. Tune in! The Anti-Media radio show airs Monday through Friday @ 11pm Eastern/8pm Pacific. Help us fix our typos: [email protected].