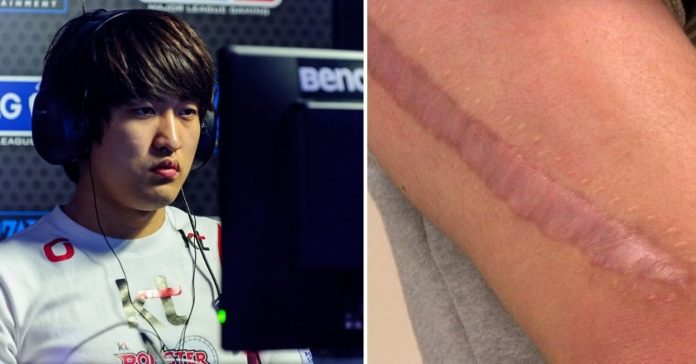 In one of the world’s most wired nations on Earth, e-sports — South Korea’s national pastime — has turned into a national crisis, with at least 680,000 children aged between 10 and 19 now addicted to online gaming. They say children are the future of a country, but with nearly 1 in 10 children (that’s 10% though VICE estimates it can be as high as 50%) spending 7 to 20 hours a day playing video games, the future of South Korea is all but lost.

StarCraft, a game released by Blizzard Entertainment in 1998, is a mainstay of the country’s professional gaming leagues (the South Korean gaming market is worth $9.16 billion). Lee Young-ho, a StarCraft player for KT Rolster — the South Korean professional StarCraft: Brood War and StarCraft II team — is one of the ‘professionals’ who are destroying their lives and their bodies playing online games like Starcraft and League of Legends. After repetitive strain of gaming for over 10 years injured and deformed Lee’s muscles, KT Rolster paid for his surgery to save his illustrious career as a ‘sportsman’. Lee calls the half an inch wide post-operative scar — stretched from just above the elbow and up over his right shoulder — a badge of honor. Kang Doh Kyung, Lee’s coach, tells BBC:

“They’re athletes, and injuries happen… I believe that e-sport has plenty of potential [to be regarded as a proper sport], although perhaps not as much as physical games. E-sports is in the process of becoming a mental sport like chess… When people immerse themselves in something and become addicted to it, then they cross the line. Our bodies might be very tired or in poor condition. These things happen not only while playing games. Even when people work out, some people can have a heart attack.”

When BBC News reporter Dave Lee visited KT Rolster’s Starcraft and League of Legends’ players’ training rooms, he saw healthy and happy gamers training hard to be Lee. While they seemed well looked-after to Dave, the same gamers suffer career-ending chronic injuries — just like athletes — and drop like flies due to constant pointing and clicking.

In 2005, a 28-year-old gamer collapsed and died from organ failure after playing for 50 hours straight. In 2010, a married couple from Suwon was charged with negligent homicide and sentenced to two years in prison for starving their three-month-old daughter to death while they raised a virtual child in an online game. The same year, a 22-year-old player was arrested for killing his mother who nagged him for spending too much time gaming; after committing the murder he went to a nearby Internet cafe to continue with his obsession. In 2011, a 21-year-old online gaming addict was found dead in his home in Inchon, apparently. The list is endless…

After young gamers started suffering from sleep deprivation, mood swings, and seizures, the government passed the “Cinderella Act” or the “Shutdown Law” late 2011, to prevent children under the age of 16 from playing online games between midnight and 6 a.m.

Though, even after five years, nothing has changed. Millions of non-professionals — kids, teens, and adolescents — are turning into zombies just like professional gamers: by spending up to 18 hours a day inside tiny cubicles at PC Bangs — South Korean Internet cafes with high-end gaming PCs. In an interview to VICE in 2015, a teenage boy admitted to spending on average 88 hours per week playing video games. Jun Byung-hun, a South Korean National Assembly member and the head of the country’s e-sports governance body (KeSPA), says moderation is the key:

“In Korea, games are the barometer of the generation gap. Parents view games as distractions from studying, while children see them as an important part of their social existence. The best way to avoid addiction is for families to play games together.”

But is gaming an issue, or is gaming addiction a manifestation of deeper issues? In South Korea, schooling is very demanding. A 2011 study found that teenage students were spending more than 2 hours every day after school playing video games. When the young minds see players like Jung Myung-hoon and Yo Hwan-lim earn close to $400,000 a year battling it out in professional StarCraft leagues watched by millions of fans on two of Korea’s major TV channels, they are bound to go astray. “A small percentage of adolescents who drop out of school and haunt the Internet cafes because of an Internet addiction problem do not get attention from anybody, which can be a serious threat to the society in the future,” says Jung-Hye Kwon, a professor of psychology at Korea University.

Hoping to combat addiction and treat the growing number of teenagers who’ve lost themselves to online gaming, the government has set up rehabilitation centers across the country. South Korea is also debating the impending Game Addiction Law, which aims to classify video games as an addictive substance, similar to drugs and alcohol.

However, with professional gaming or e-Sports being a multi-million dollar industry in Korea, the bigger question is: Will the game companies allow any law — that brands their product as addictive — or any effort — that brings their profits down — to see the light of the day?

This article (How South Korea’s Video Games Addiction is Destroying its Future) is a free and open source. You have permission to republish this article under a Creative Commons license with attribution to the author and AnonHQ.com.