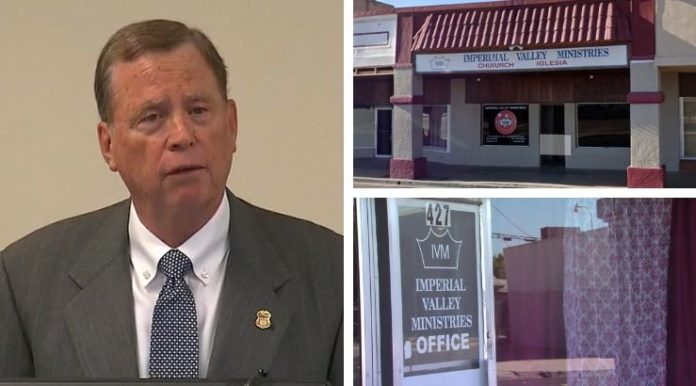 Southern California Christian ministry leaders are facing severe criminal charges from prosecutors who allege that they systematically kept homeless people and recovering drug addicts in captivity, subject them to forced labor and threatened to seize their children if they don’t bend to the will of church leaders.

Long considered an open secret on the streets of California’s cities, homeless victims are alleged by prosecutors to have been subjected to severe rights violations, as well as charges of conspiracy, benefits fraud, and document servitude.

A dozen leaders from Imperial Valley Ministries (IVM) in El Centro faced arraignment in a federal court on Wednesday for their exploitation of rehabilitating drug addicts through its network of faith-based group homes in the state.

Church leader and former pastor Victor Gonzalez, 40, of Brownsville, Texas, and his 39-year-old wife, Susan Christine Leyva, were among those charged.

Homeless people selling candy or begging for donations to sponsor their “recovery” or “rescue” missions have been a common sight in the Golden State for years. As AP reports:

“The leader of a Southern California ministry charged with using deadbolt locks to detain homeless residents and making them turn over panhandling money was no fly-by-night operator. Imperial Valley Ministries was known in the remote desert region for decades of work helping drug addicts turn their lives around.”

At a press conference, Robert Brewer, the U.S. Attorney for the Southern District of California said:

“The indictment alleges an appalling abuse of power by church officials who preyed on vulnerable homeless people with promises of a warm bed and meals.

These victims were held captive, stripped of their humble financial means, their identification, their freedom and their dignity.”

Since 2013, victims in California and neighboring states were allegedly lured to the homes with promises of free food, shelter, and emotional and spiritual support meant to get them back on to their feet.

Participants were forced to surrender all belongings as well as their passports, drivers’ licenses and documents before being cut off from their families and locked into their rooms with doors nailed shut or sealed with multiple deadbolts, the indictment said.

Leaders at the non-denominational Christian church also forced homeless people to beg for “donations” for nine hours per day, six days per week.

A list of 29 rules forced adult victims to live in cult-like isolation from the outside world. Rules included a ban on adult victims leaving group homes alone and a ban on communicating with family members or even making phone calls in general because “only God loved them now,” the ministry claimed.

“You can’t go to the front yard, unless told so by the counselor,” the rules read. In some cases, those who entertained notions that they could leave were told that the ministry would snatch their children.

Residents’ shower time was restricted to five minutes while victims were instructed to “at no time” lock their bathroom doors. The list even demands that “you are not to discuss things of the world.”

The leaders also took the money that was gathered by participants and even stole the victims’ welfare benefits and food stamps or Supplemental Nutritional Assistance Program (SNAP) cards, prosecutors claim. Prosecutors say that one diabetic resident was refused food or medicine for their low blood sugar.

“If receiving any income, 10 per cent will go to tithes, 30 per cent to the home…and the rest will be put away for you by the director.”

“None of the above rules apply to the pastor or his family,” the list added.

A lot of fraudsters, many well-known, have found their way into the "Christian Greed Industry," using Christ's name & Word to garner wealth, infamy & political power; though they are mostly interested in the wealth part. This Imperial Valley Ministries is the tip of the iceberg. pic.twitter.com/w1ayANTQ3A

A statement from the U.S. Attorney’s office said:

“Windows were nailed shut at some group home locations, leading a desperate 17-year-old victim to break a window, escape, and run to a neighboring property to call police.”

“Human trafficking robs victims of their most basic human rights.

Victims of human trafficking are often unseen by society, left pleading in silence.

“This is the most significant labor trafficking prosecution in this district in many years.

[Prosecuted] cases are few and far between because many victims live in captivity and fear, powerless to report the crimes against them.”

Leaders of Imperial Valley Ministries, including the former pastor, are charged with subjecting dozens of mostly homeless people to forced labor, coercing them to surrender welfare benefits and compelling them to panhandle up to nine hours a day…https://t.co/j9mbKROfre pic.twitter.com/tOhcTmETTF