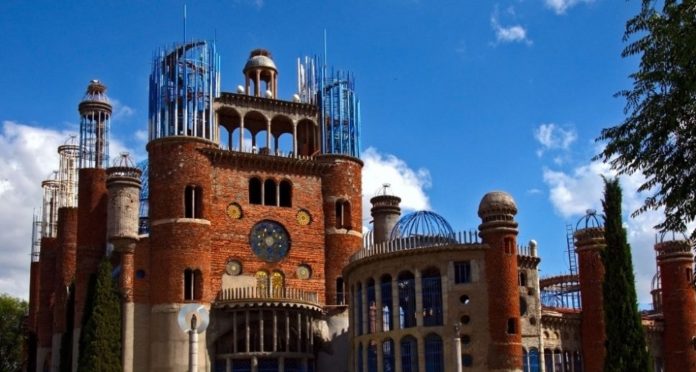 With the unshakeable conviction that God wanted him to build a cathedral, 90-year-old Don Justo Gallego Martinez (born 20 September 1925), a farmer turned Trappist monk with no formal architectural or construction training, has spent nearly 53 years building a 131 feet tall cathedral from junk in Mejorada Del Campo, a little over 12 miles outside of Madrid.

“You don’t need to study. You just need strength. It all comes from above. My mother was very pious. She taught me my faith and I love the Church. So I put everything into this.” When he was 10, Justo witnessed communist forces shooting priests and ransacking the church in Mejorada Del Campo during the Spanish Civil War (1936 to 1939). The atrocities committed through the struggle between democracy and fascism — Franco’s ensuing “white terror” killed over 200,000, while the leftist groups’ “red terror” killed an estimated 38,000 — not just interrupted his basic education, but the spiteful events he experienced left Justo with little respect and trust for the socialist government.

In 1953, a deeply religious young Spaniard entered a Trappist monastery to become a Roman Catholic monk, spending eight years trying to fit in with the order. But days before he could take his vows, Justo was diagnosed with tuberculosis and was forced to leave the monastery of Santa Maria de la Huerta for fear of contaminating others. Devastated by the ‘setback’ of his first attempt at a spiritual life, a heartbroken and critically ill Justo prayed to the Virgin Mary, vowing that if he survived, he would build a grand cathedral in honor of Our Lady of the Pillar. True to his vow, Justo laid the foundation stone for a cathedral on 12 October 1963 (feast day of the Our Lady of the Pillar), on a plot of land bequeathed to him by his parents  — despite lack of resources, finances, formal design, planning permission, and benediction from the Catholic Church. Inspired by St Peter’s Basilica, the White House, and a variety of European castles and churches, Justo single-handedly began constructing the giant cathedral – his own personal way of dedicating his life and work to God – out of trash.

“Little by little, the building was erected, spending my family inheritance to keep it going. There were never any construction plans or official permission. Everything is in my head. I am not an architect or a stonemason. I have never had any training in the building profession. I was inspired by books about cathedrals, castles and other religious buildings and they gave birth to my own work.

“But my principle source of illumination and inspiration has always been the Word of Christ. It is He who guides me and it is to Him that I offer my work, in gratitude for the life he has given me and in penitence for those who have not followed his path.”

Justo has been painstakingly constructing the cathedral — Nuestra Señora Del Pilar — piece by piece over five decades. He gets up at 3.30 am to collect his building material — used oil drums, abandoned plastic tubes, tin cans, pieces of steel and sheet metal, bricks and tiles discarded as irregular by local factories, electric cables, old carpet, and old bicycle wheels — and spends his day cementing a scrap piece of this to a recycled piece of that, hour after hour, six days a week. What he has achieved is impressive, incredible and impeccable. With dramatic spires, a series of huge domes, stained glass windows, a crypt, cloister and a number of intricate spiral staircases, the cathedral is a complex structure. The Huffington Post reports:

“Today the frame of the cathedral, which has a 131-foot-tall dome modeled on St. Peter’s, towers over the town of Mejorada Del Campo. The interior is roughly half the size of a football field. Below the main building there is a crypt, a complex of minor chapels, cloisters, lodgings and a library. The total area of the church is over 86,000 square feet. The entire structure was built without the use of a crane. “Nearly all of the building materials are scavenged or donated. Looking around, one can see columns made of concrete-filled plastic buckets or air ducts and stairs whose lips are formed from coils of wire. Piles of building materials — concrete, brick, rebar, even newspaper — line every wall and fill every nook. Though many of the stairwells are partially blocked by stacks of pipes, it is still possible to get to the roof for the best view of Mejorada Del Campo. Don Justo’s full vision for the cathedral includes two narrow spires to reach almost twice as high as the roof of the edifice.”

Though he worked alone for the first 20 years and financed his passion by selling and renting some of his inherited farmland, today his family members and volunteers help him with the labor. For the last 20 years, Justo has been assisted by a local man, Angel Lopez, who has taken on the heavy lifting. A group of 20 German priests travel south every July to work alongside him for a few days. After the cathedral was featured in a Spanish TV ad in 2005, companies, individual supporters and visitors have been regularly donating building material to Justo. Work of Faith [In Progress]

Despite five decades of painstaking toil, the cathedral is far from finished. Windows are left unpainted, one of the domes is to be covered, and the floor to be completed. The Catholic Church has offered no funds or assurance that it will consecrate the structure as a church or cathedral. Cathedrals take a long time to build; it is unlikely Justo’s creation will reach completion during his lifetime. But this hasn’t deterred Justo — he is still climbing scaffolding and dragging recycled materials across the construction site.

“With the necessary funds, we can finish la catedral in two to three years. Once we complete the dome and finish the floor and pews, religious services can be held here.” The eccentric edifice is allowed to stay by the town council, so far, because it is bringing tourists to a nondescript suburb. However, its future is still uncertain with skeptics claiming the building is bound to fall in on itself. Pablo Queralto, an architect working for Mejorada council, told BBC:

“It’s very difficult to get a license now. For example the bricks don’t meet minimum standards, either in themselves or the way they’ve been laid.” According to The Daily Mail, the cathedral’s giant towers dwarf surrounding apartments so some locals call the building an eyesore. But Justo is unfazed:

“People have called me crazy and insulted me. But they’re ignorant. Realizing my ideal spurs me on. People today are very passive, they don’t value anything. They’re slaves to worldly things. When I look at what I’ve created, it overwhelms me and I give thanks to the Lord.”

Justo has bequeathed his cathedral to the local bishopric in the hope it can eventually serve as a fully functional parish church.

“Who knows what he’ll do. It’s up to him. [But] If I lived my life again, I’d build this church again, only bigger. Twice the size. Because for me, this is an act of faith.” This article (Spanish Eccentric Monk, 90, Single-Handedly Erects Grand Cathedral — Out of Junk) is a free and open source. You have permission to republish this article under a Creative Commons license with attribution to the author and AnonHQ.com.