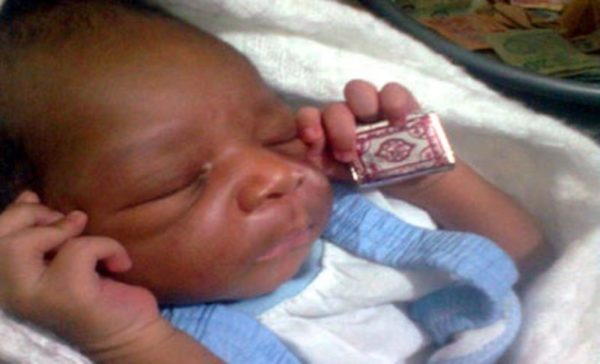 Boko Haram violence, carried out mainly by jihadists in the north of the country, has placed Nigeria in the news, for the wrong reasons. However, as the north continues to be restive, in the southwestern part of the country, a strange happening is occurring that the Western media is not reporting on.

According to what we have gathered, in the last four years, two babies have been born with something accompanying them from their mothers’ womb. The Muslims’ Holy Book, the Quran is said to have accompanied the babies’ safe arrival. Strange as it may sounds, so it is for the numerous people who have witnessed it happened. The first incident happened in May 2012 at a local government area called Mushin, in Lagos State. The baby boy was born to a Christian family at the White Garment Church.

The mother of the baby, Mrs Kikelomo Ilori told local media that her baby came out from her womb holding a miniature Quran in his hands. She said she had carried her pregnancy for about 10 months before delivering, adding further, that the nurse who attended to her during birth told her that the Quran should be thrown away, so as not to leak the incident to the public.

Mrs Ilori told PM News in an interview:  “When my baby was delivered holding a Quran in his hand, the nurse said the Quran should be thrown away. But I insisted my mother must see it before any action could be taken”.

When the news of the strange incident was made public, large crowds gathered at the residence of Mrs Ilori to catch a glimpse of the newly born baby.

A Christian Reverend, Victoria Yetunde Dada, confirmed the strange story. He revealed that Mrs Iloris had been going to his church for prayers and counseling during her gestation.

“I advised her not to abort the pregnancy because she might die in the process. Again, I told her the fetus was sent by God and will be great,” Rev. Dada said.

The second incident happened in June 2013, in the same Lagos State. In an area called Shasha, residents woke up one morning to hear another strange story. A woman had given birth in the neighborhood. After she pushed the baby out, she pushed another thing out. This time, not a human being, but another miniature Quran, just like the previous one.

Residents again trooped to the house to see the wondrous thing. PM News was once again at the residence to verify the incident. Reporters of the media outlet managed to struggle through the thick crowd to access the parents of the baby.

The mother of the baby, Kabirat Lamidi told the reporters that right from the conception of the baby, she had been sick. She revealed carrying the pregnancy for 11 months, and even went for an ultrasound scan, which proved that there was an object with the baby in her womb.

She told the reporters: “I have been hearing about such incidents and I have always insulted people thinking it could never happen. I believe it is a gift from Allah. My advice to people is that they should henceforth watch their mouth. I didn’t believe before now.”

Father of the baby, Luqman Lamidi said he was in a drinking bar when he was called and told that his wife had delivered a baby with a Quran. He added that he did not believe it until he came and saw the Quran covered with blood. “I arrived home and saw a lot of crowd and could not even enter. In fact, I am surprised that a drunk like me could produce a child that came into this world with a Quran,” he said.

A staff nurse with the Shasha Medical Centre, who assisted Mrs Lamidi with the delivery, also told the investigative reporters of PM News – who were keen on following the incident – that she was called by neighbors when the woman was in labor.

The nurse named Saudat Olawuwo narrated what happened thereafter she was called to assist Mrs Lamidi to deliver.

“By the time I came the day she was in labour, the baby was already coming out. So I assisted her. After that, we were expecting the placenta, but the woman began behaving like one about to run mad. I was so confused. The woman was shouting that she wanted to push again and all of a sudden, the Quran wrapped in nylon and stained with blood jumped out. Out of confusion, I ran out and called people who came to see. We also called a Muslim cleric around the area who came and prayed for the baby,” she said.

Chief Imam of the area, Alhaji Abdul Rafiu Oyedokun, confirmed that he was the one who tore the nylon from the Quran after he was called to see what had happened.

Alhaji was quoted as saying “When I came, people were still doubting if the object was a Quran or not, so I tore the nylon with blood on it publicly and everyone confirmed it.” The PM News reporters themselves said while they were in the room together with the baby and the parents, they noticed that each time the Quran is placed on the baby’s chest, he will lift his hands up and would not drop the hands until the Quran is taken off.

Reacting to the strange story, a medical practitioner in Lagos, Dr Bode Tawak said it is not possible for a baby to be born holding something, but admitted there are things science cannot explain.

This article (Babies Born with the Islamic Quran in Nigeria, Eyewitness Accounts [Video] (Investigative) is a free and open source. You have permission to republish this article under a Creative Commons license with attribution to the author and AnonHQ.com.