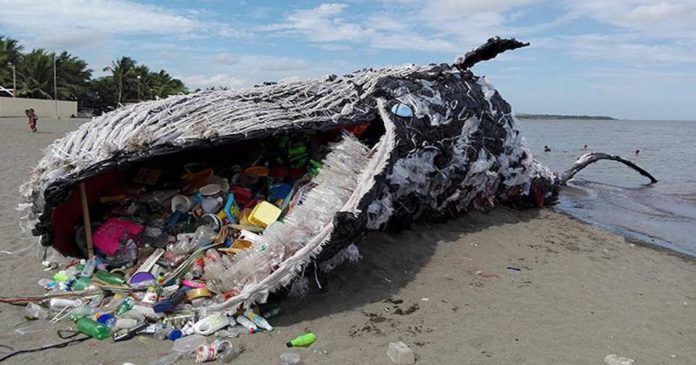 Wonder where your plastic waste goes? In case you really want to know and do something about it, the plastic you use and throw incessantly ends up inside innocent sea mammals.

In February, a young 10-metre-long male sperm whale, the largest of the toothed whales, was found dead because it could not expel 64 pounds of plastic debris it had swallowed.

This beached juvenile Sperm #Whale was found off the coast of #Spain. If it looks emaciated, it’s because it starved to death. In its stomach was 64 lbs of #plastic, causing an infection. Our #Oceans are drowning in a sea of plastic. We need to break our addiction. pic.twitter.com/oICIlyGHJw

The inner walls of the whale’s body, which washed ashore dead on the Murcian coast in southern Spain, were inflamed because of peritonitis (an infection of the abdomen), likely because the ginormous amount of plastic had blocked the whale’s digestive system.

Sperm whales, an endangered species protected in the US under the Endangered Species Conservation Act, typically eat squid and live around the same lifespan as humans, averaging 70 years. Male sperm whales could grow up to 90,000 pounds or 45 tons.

Adult female sperm whales are much lighter: 30,000 pounds or 15 tons. But the mammal that washed up on the beach of Cabo de Palos on February 27 was severely underweight: authorities say the animal weighed about 14,300 pounds or seven tons.

As a result of the whale’s shocking death, the Murcia government launched a campaign against dumping plastic waste into the coastal town’s water.

“The presence of plastics in seas and oceans is one of the greatest threats to the conservation of wildlife throughout the world, since many animals are trapped in the trash or ingest large amounts of plastics that end up causing their death. The region of Murcia is no stranger to this problem, which we must tackle through clean-up actions and, above all, citizen awareness,” said Consuelo Rosauro, director-general of the natural environment in the Murcian government.

This wasn’t the first time a sperm whale turned up dead onshore, its body filled with trash. In January 2016, 29 sperm whales were found stranded on shores around the North Sea, an area that is too shallow for the marine wildlife. The whales had stomachs full of plastic waste, including a 13-meter-long fishing net, a 70-cm piece of plastic from a car and other pieces of plastic litter. Approximately 5 trillion pieces of plastic are estimated to be floating around the world’s oceans. Just a month ago, a scientific team reported that 79,000 tons of plastic debris now occupy an area in the Pacific Ocean about three times the size of France.

To make matters worse, marine experts believe the total weight of plastic in our oceans could outweigh fish in the world’s oceans by 2050. 70% of marine litter is non-degradable plastic; that figure is expected to triple within a decade.

Ironically, the plastic that chokes the marine wildlife also enters the ocean food chain exposing marine life to toxic chemicals that invariably end up in the food on our plates. But strangely, the facts don’t matter to humans…