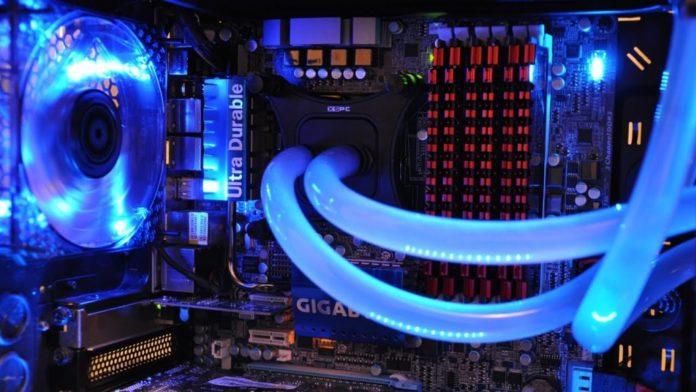 When you accidently spill water, coffee, soda or any liquid for that matter on your computer, what do you do? You freak out. You frantically search Google on your Smartphone to figure out the easiest and the fastest DIY technique to save your expensive gadget from an untimely death. Bottom line: Water and computers don’t mix.

But now engineers and scientists at Stanford University have done the unthinkable. After more than a decade of research, Manu Prakash, lead researcher and bioengineer at Stanford University, and two of his students, have created a synchronous computer that operates using the unique physics of moving water droplets.

To begin with, the researchers devised a system in which tiny water droplets were trapped in a magnetic field. Although, the team could control these water droplets by infusing them with magnetic nanoparticles and moving them around a maze of iron bars, synchronizing their movements and process simultaneously, they built a rotating magnetic field that could act as a fundamental element of computer science – an operating clock.

Using droplets smaller than poppy seeds impregnated with magnetic nanoparticles, today the new fluidic computer uses electromagnetic fields to accurately pump the water droplets around a set of physical gates to perform logical operations. Suspended in oil and timed to move in a precise manner, the droplets in the computer can theoretically perform any operation that a conventional electronic computer can crunch, although at significantly slower rates.

Every time the field flips, the polarity of the bars reverses, drawing the magnetized droplets in a new, predetermined direction, like slot cars on a track. Every rotation of the field counts as one clock cycle, like a second hand making a full circle on a clock face, and every drop marches exactly one step forward with each cycle.

A camera records the interactions between individual droplets, allowing observation of computation as it occurs in real time. The presence or absence of a droplet represents the 1s and 0s of binary code, and the clock ensures that all the droplets move in perfect synchrony, and thus the system can run virtually forever without any errors. Prakash believes the ability to precisely control droplets using fluidic computation could have a number of applications in high-throughput biology and chemistry, and possibly new applications in scalable digital manufacturing.

“We already have digital computers to process information. Our goal is not to compete with electronic computers or to operate word processors on this. Our goal is to build a completely new class of computers that can precisely control and manipulate physical matter. Imagine if when you run a set of computations that not only information is processed but physical matter is algorithmically manipulated as well. We have just made this possible at the mesoscale [10 microns to 1 millimeter].” Given that the droplet computer is extremely robust and adheres to universal design rules, Prakash and his team intend to produce a design tool for these droplet circuits for anyone to use.

“We’re very interested in engaging anybody and everybody who wants to play, to enable everyone to design new circuits based on building blocks we describe in this paper or discover new blocks. Right now, anyone can put these circuits together to form a complex droplet processor with no external control – something that was a very difficult challenge previously. If you look back at big advances in society, computation takes a special place. We are trying to bring the same kind of exponential scale up because of computation we saw in the digital world into the physical world.” This article (Stanford Engineers Develop Computer that Operates on Water Droplets) is a free and open source. You have permission to republish this article under a Creative Commons license with attribution to the author and AnonHQ.com.