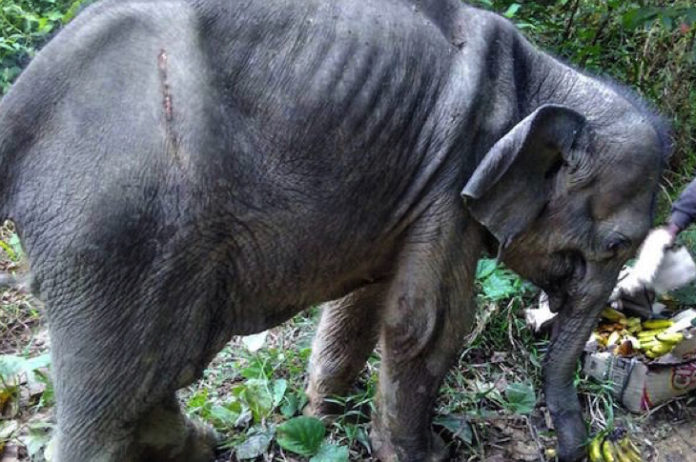 This baby elephant had a rough start in life, which is something rescuers realized as soon as they saw her wandering around in the forest. Female elephants typically stay in the same herd for most, if not all, of their lives, so to see a female alone is already odd, but to see a baby alone is even more alarming.

Usually when discussing injuries and deaths of wild elephants, the culprit is typically the ivory trade because poachers kill elephants daily just to cut off their tusks for money. However, there is another industry that is wreaking havoc on the population of many animals, including elephants, orangutans, and tigers, that garners less attention.

That industry is the palm oil industry. Palm oil is extracted from a palm fruit that is native to west and Southwest Africa but is found elsewhere thanks to the industry and the plant it derives from needs humidity to survive. The demanding climate requirements necessary to grow millions of these plants has caused companies to cut down whole forests and other ecosystems to make room for their plantations. While some animals make it out alive during this process and are displaced at best, many are injured or killed if they get too close to plants.

Among the animals killed for proximity to plantations are elephants, and that’s what rescuers speculate is the case with this baby elephant’s mom. Babies regularly become orphaned after their mothers are attacked or killed in the area where the baby was found, and the baby herself was found with a bullet wound on the side of her body.

She was also extremely emaciated, likely because she had not yet weaned off of her mother’s milk completely. Since she is so young, she probably didn’t learn how to forage for herself yet either, making it even more difficult for her to find sustenance all alone.

Thankfully, she was taken in by BKSDA and is now getting the care she needs to grow up and be a strong, healthy woman. Whether she will be able to successfully be released to the wild is unclear, but she’s lucky to be alive after coming face to face with workers in the palm oil industry.

If you want to help innocent animals like this baby and protect the environment, consider not purchasing products with palm oil in them. Here is a quick guide to get you started.

This article (This Starving Baby Elephant Was Found Shot And Motherless For The Saddest Reason) is free and open source. You have permission to republish this article under a Creative Commons license with attribution to the author and TrueActivist.com