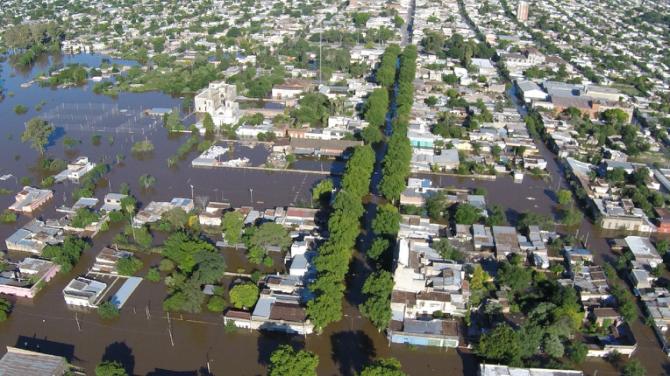 More than 100,000 individuals have been forced to evacuate their homes this month in results to heavy flooding brought on by El Niño, “an irregularly occurring and complex series of climatic changes affecting the equatorial Pacific region and beyond every few years.”

Countries affected by the heavy rain fall include; Paraguay, Uruguay, Brazil and Argentina, with Paraguay being the most impacted, having an estimated 100,000 people displaced over the span of two weeks. While 20,000 have been left homeless in Argentina and a further 9,000 in Uruguay, according to local media.

According to new figures gathered and further released yesterday by the Municipal Emergencies Office, as many as 160,000 people have been forced to leave their homes due to the catastrophic results of this season’s El Niño storms.

The Office stated that “[The flooding] was directly influenced by the El Niño phenomenon which has intensified the frequency and intensity of rains.”

The United Nations weather agency, the World Meteorological Organization, also touched on this year’s noticeably bad weather, stating that this year’s storm season has been the worst in over 15 years. The UN included that it is still likely that more flooding and droughts will reach the tropics and subtropics within the next few months.

Prior to the flooding in South America we had calamitous storms in both Yemen and Mexico as Cyclone Chapala began to near. Before that we had Hurricane Patricia in October, which prompted landfall in Puerto Vallarta and Manzanillo, forcing evacuation of a further 50,000 people.

Meteorologist, Eric Holthaus, wrote at Slate.com that due to recent climate changes it was “exactly the kind of terrifying storm we can expect to see more frequently in the decades to come.”

Many of the people affected by the storm are low-income families living along the River Paraguay. Paraguay’s emergency office was quick to bring news on the area, stating that it is likely water levels of the river will continue to rise in the coming days and may not settle until January.

Although there is still no official death toll, some have been recorded dead after falling trees and wreckage have fallen on top of them during the storm.

The Paraguayan Government are currently trying to free up funds in order to help those affected. As a result Paraguay’s capital, Asunción as well as several other cities and towns around the country, have been put into a state of emergency. Evacuation has also began in Alberdi (Around 75 miles south from Asunción) as the likely hood of being hit is also high.

Be prepared for anything. Our planet is the most unpredictable source of devastation that you will ever see.

This Article (State Of Emergency Declared In South America As Over 100,000 Flee From Devastating Flooding) is free and open source. You have permission to republish this article under a Creative Commons license with attribution to the author (FLU5CH) and AnonHQ.com.