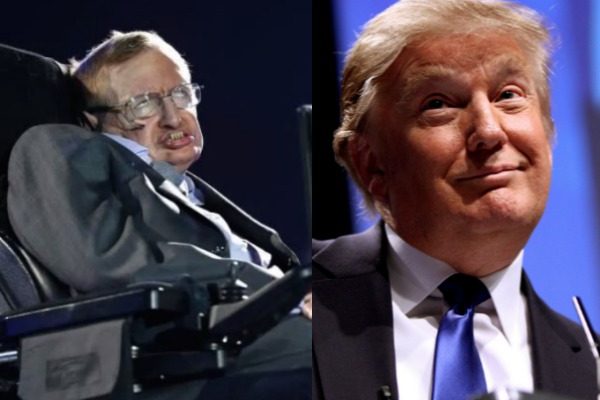 “He is a demagogue who seems to appeal to the lowest common denominator,” said Hawking.

Stephen Hawking, whose mind holds the secrets to the very workings of the universe, isn’t a fan of Republican presidential nominee Donald Trump. He made this clear when he weighed in on the upcoming 2016 United States presidential election and referred to Trump as a “demagogue who seems to appeal to the lowest common denominator.”

When the author of “A Brief History of Time” was asked in an interview whether his knowledge of the universe meant he could explain the presumptive Republican nominee’s appeal, he replied “I can’t.”

“Gone are the days we could stand on our own against the world. We need to be part of a larger group of nations, both for our security and our trade,” he added.

Hawking may have widened the world’s understanding of time, space, stars, galaxies, and black holes, but he seems stumped on how a man like Donald Trump – who promotes racist, sexist, and bigoted ideals – could garner the support he has. He’s not alone.

Many have wondered how the November election has led up to a showdown between Donald Trump and Hillary Clinton – a war criminal who deserves jail time, not more power. If it wasn’t clear that the system is rigged before, it surely is now.

Or, at least, that’s many peoples’ theory.

This article (Stephen Hawking Is Bewildered By Donald Trump’s Popularity [Watch]) is free and open source. You have permission to republish this article under a Creative Commons license with attribution to the author and TrueActivist.com