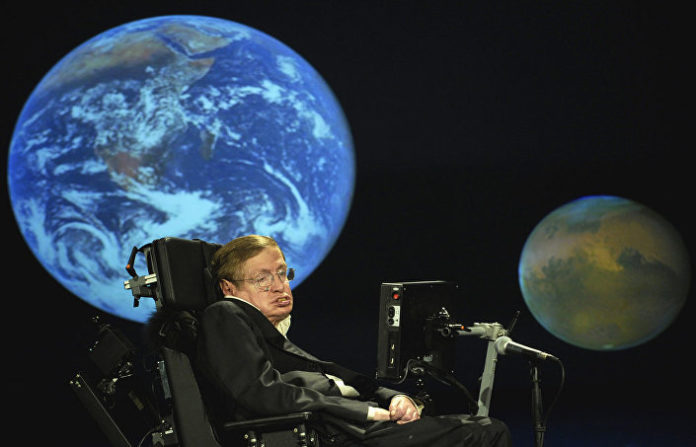 We are at the most dangerous moment in humanity thanks to British electorate’s decision to reject membership of the European Union and the American public’s decision to embrace Donald Trump, claims 74-year-old theoretical physicist Professor Stephen Hawking who cited the economic consequences of globalization, accelerating technological change, automation of factories, the rise of artificial intelligence, and “awesome environmental challenges” (namely climate change, food production, overpopulation, the decimation of other species, epidemic disease, and acidification of the oceans) as threats to our existence.

In an op-ed for The Guardian, Hawking writes:

“It was, everyone seems to agree, the moment when the forgotten spoke, finding their voices to reject the advice and guidance of experts and the elite everywhere.

“What matters now, far more than the choices made by these two electorates, is how the elites react. Should we, in turn, reject these votes as outpourings of crude populism that fail to take account of the facts, and attempt to circumvent or circumscribe the choices that they represent? I would argue that this would be a terrible mistake.

“For me, the really concerning aspect of this is that now, more than at any time in our history, our species needs to work together.  Together, they are a reminder that we are at the most dangerous moment in the development of humanity. We now have the technology to destroy the planet on which we live, but have not yet developed the ability to escape it.

“We need to break down, not build up, barriers within and between nations. If we are to stand a chance of doing that, the world’s leaders need to acknowledge that they have failed and are failing the many.”

Whether or not you voted #Trump or support #brexit, #stephenhawking article in @guardian is a must read and spot on. https://t.co/5yFlTfDQW4

It is not the first time Hawking has shared his opinion about Brexit or Donald Trump. “He is a demagogue, who seems to appeal to the lowest common denominator,” the University of Cambridge professor told ITV’s Good Morning Britain in May.

In the same interview, he appealed to the British voters to back the remain campaign in the European Union referendum because he felt Britain leaving the European Union (Brexit) would make the nation more isolated and insular. In March, Hawking had pronounced the prospect of Brexit a disaster for science.

“There are two obvious reasons why we should stay in. The first is that it promotes the mobility of people. Students can come here from EU countries to study, and our students can go to other EU universities. More importantly, at the level of research, the exchange of people enables skills to transfer more quickly, and brings new people with different ideas, derived from their different backgrounds. The other reason is financial. The European Research Council has given large grants to UK institutions, either to foster or promote exchanges.”

This article (Stephen Hawking Warns: Brexit, Trump Indicate We Live In the Most Dangerous Time) is free and open source. You have permission to republish this article under a Creative Commons license with attribution to the author and AnonHQ.com.