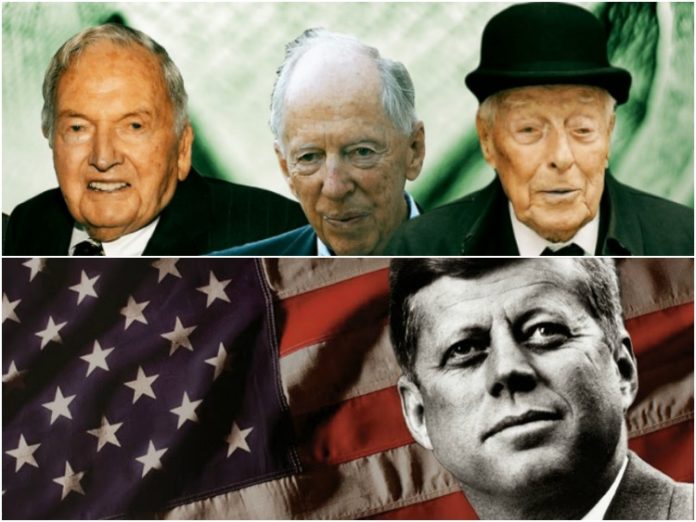 The 35th President of the United States (1961-1963) — the youngest person elected to the office, as well as the youngest President to die, was John F. Kennedy. He was hardly past his first thousand days in the White House when he was assassinated in Dallas on November 22, 1963. Competing conclusions of the Warren Commission, the Federal Bureau of Investigation, the House Select Committee on Assassinations, and a team of retired secret service officers have failed to provide clarity over the precise circumstances of JFK’s assassination — even after 53 years. Was he assassinated as a conspiracy? So it seems.

In his speech before the American Newspaper Publishers Association on April 27, 1961, John F. Kennedy talked about ‘a monolithic and ruthless conspiracy’ and ‘secret societies’ that rule the United States in particular, and the world in general. Excerpts:

“The very word “secrecy” is repugnant in a free and open society; and we are as a people inherently and historically opposed to secret societies, to secret oaths and to secret proceedings. We decided long ago that the dangers of excessive and unwarranted concealment of pertinent facts far outweighed the dangers which are cited to justify it.

“For we are opposed around the world by a monolithic and ruthless conspiracy that relies on covert means for expanding its sphere of influence — on infiltration instead of invasion, on subversion instead of elections, on intimidation instead of free choice, on guerrillas by night instead of armies by day.

“It is a system which has conscripted vast human and material resources into the building of a tightly knit, highly efficient machine that combines military, diplomatic, intelligence, economic, scientific and political operations. Its preparations are concealed, not published. Its mistakes are buried not headlined. Its dissenters are silenced, not praised. No expenditure is questioned, no rumor is printed, no secret is revealed.”

It is said the speech JFK made in his first 100 days in office was apparently the one that sealed his fate. He didn’t want to censor the news, to stifle dissent, to cover up government mistakes or to withhold from the press and the public the facts they deserved to know. He wanted the press to inform, to arouse, to reflect, to lead, and to even anger public opinion. The hard hitting speech obviously didn’t go down well with the “system” and the powerful elite at the helm who felt threatened with JFK’s ideas.

Then, on June 4, 1963, John F. Kennedy signed Executive Order 11110. The order called for the issuance of $4,292,893,815 in United States Notes through the U.S. treasury rather than the Federal Reserve System — the central banking system of the United States, which is neither federal nor a “system” owned by the government; it is a private entity.

Executive Order 11110 gave the U.S. treasury the explicit authority to issue silver certificates against any silver bullion, silver, or standard silver dollars in the Treasury. As a result, around $4.3 billion in United States Notes were brought into circulation in $2 and $5 denominations. When JFK was assassinated less than six months later, $10 and $20 United States Notes were being printed by the U.S. treasury.

Basically, with Executive Order 11110, John F. Kennedy returned to the U.S. Government the power to issue an interest-free and debt-free currency backed by silver reserves; stripped the Rothschild Bank of its power to loan money to the United States Federal Government at interest; and attempted to eliminate the Federal Reserve System so it could no longer be used by the ruling elite to manipulate the economy.

“When Kennedy called for a return of America’s currency to the gold standard, and the dismantling of the Federal Reserve System — he actually minted non-debt money that does not bear the mark of the Federal Reserve; when he dared to actually exercise the leadership authority granted to him by the U.S. Constitution…Kennedy prepared his own death warrant. It was time for him to go.“ — Colonel James Gritz

After his assassination, the United States Notes that JFK had issued were immediately taken out of circulation. Today, Federal Reserve Notes continue to serve as the legal currency of the United States.  If the U.S. Congress coined its own money as the Constitution directs, it would not have to pay the hundreds of billions of dollars of interest that it now pays each year to the bankers for the national debt – for money that came out of nothing.

“Perhaps the assassination of JFK was a warning to all future presidents not to interfere with the private Rothschild Federal Reserve’s control over the creation of money. It seems very apparent that President Kennedy challenged the ‘powers that exist behind U.S. and world finance‘.”

This article (The Speech And The Executive Order That Got US President John F. Kennedy Killed) is a free and open source. You have permission to republish this article under a Creative Commons license with attribution to the author and AnonHQ.com.