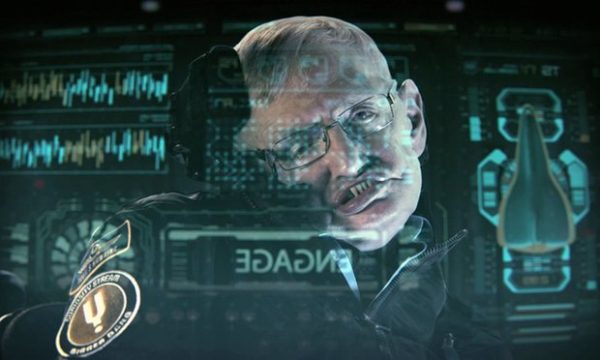 Professor Hawking is paralyzed by motor neurone disease. Due to his sickness, he has been restricted to a wheelchair, and has a computer robot that aids him to talk. Mr Hawking gave his latest warning in a new film released online titled Stephen Hawking’s Favorite Places. In 2010, in a television documentary series on the Discovery Channel, Professor Hawking warned that human contact with aliens would bring doom to the human race living on Earth. According to Hawking, in a universe with 100 billion galaxies, with each containing hundreds of millions of stars, it’s unlikely that Earth is the only place where life has evolved. He said his brain has rationalized that there is life somewhere else, apart from what exists on Earth.

“To my mathematical brain, the numbers alone make thinking about aliens perfectly rational. The real challenge is working out what aliens might actually be like,” Hawking said in 2010. Professor Hawking revealed that the aliens he is imagining could be microbes — basic animals such as worms, which have been on Earth for millions of years — predicting that their life could have developed much further, transforming them from one stage to the other, just like the evolution stages of human beings. He believes that humanity will be shocked, once they set their eyes on aliens. According to Hawking, it is possible that the aliens might have used all their resources, and are looking for other places to rule, thus, making human contact with them very dangerous. He also suggested that alien life exists in many parts of the universe: Not just in planets, but perhaps in the centre of stars or even floating in interplanetary space.

Professor Hawking said: “We only have to look at ourselves to see how intelligent life might develop into something we wouldn’t want to meet. I imagine they might exist in massive ships, having used up all the resources from their home planet. Such advanced aliens would perhaps become nomads, looking to conquer and colonize whatever planets they can reach.” Professor Hawking compared alien contact with human beings, to the contact made by Europeans with the people of the New World (The Americas).

“If aliens ever visit us, I think the outcome would be much as when Christopher Columbus first landed in America, which didn’t turn out very well for the American Indians,” he said.

In this latest film, Hawking repeated what he said in 2010. Professor Hawking is seen in the film in his own CGI spacecraft (the SS Hawking), taking viewers to five significant locations across the cosmos. On arriving at Gliese 832c, a planet 16 light years away, Hawking reflected: “As I grow older I am more convinced than ever that we are not alone. After a lifetime of wondering, I am helping to lead a new global effort to find out. The Breakthrough Listen project will scan the nearest million stars for signs of life, but I know just the place to start looking. One day we might receive a signal from a planet like Gliese 832c, but we should be wary of answering back.” Light years is a unit of length used informally to express astronomical distances. One light year is approximately 9 trillion kilometres.

Finally, Hawking returned to Earth to Santa Barbara, where he talked nostalgically of his early career at Cal Tech, and times spent on the sunny California coast with his young family.

He then revealed his objective of undertaking the journey: “My goal is simple: complete understanding of the universe. It’s always been a dream of mine to explore the universe.”

The film is 25 minutes long, and is appearing on the platform CuriosityStream. The film also looks at the Big Bang, which has been the focus of much of Hawking’s career. Viewers are also taken deep into a super-massive black hole, Sagittarius A*, where Hawking explains his theory of matter, and to Saturn, which Hawking calls the most spectacular destination in the Solar System. Extraterrestrial life, commonly referred to as alien life, is the life that does not originate from the Earth. Some cosmologists believe alien life ranges from simple bacteria-like organisms to civilizations that are far more advanced than that of human beings. Some exobiologists also suspect that alien life exists, although there is no empirical evidence to prove it. This article (Stephen Hawking Again Warns Humans not to Contact Aliens in New Film [Video]) is a free and open source. You have permission to republish this article under a Creative Commons license with attribution to the author and AnonHQ.com.