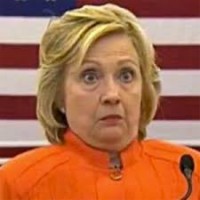 It is a grand mystery to some. Despite all the scandals, indictments and national headlines Hillary Clinton is still the leading candidate to win the United State Presidency. So if you are one of the 44% of Americans who claim they will vote for Hillary Clinton this coming fall, here is a list of reasons why you might want to reconsider your vote.

Hillary Clinton is literally facing indictment by the FBI over national security breaches regarding her email account as Secretary of State. If you did not know, it is illegal to have an unsecured email account serving as Secretary of State and Hillary Clinton has admitted to knowing this law all along. Despite knowing this, she created an un-secured email account to exchange classified details regarding the inner workings of the United State government. It is no smear campaign, Hillary Clinton is being indicted by the same government she represented: http://www.breitbart.com/big-government/2016/01/11/report-fbi-investigation-of-hillary-clinton-expands/

Breaking this law and putting national security aside, Hillary Clinton broke a second law as Secretary of State. While serving in office, foreign governments gave millions of dollars to foundation. While the foundation has disclosed foreign-government donors for years, it has not previously detailed the donations that were accepted during Clinton’s four-year stint at the State Department. This not only is this a clear violations of ethics serving in such a high profile government position but it has also resulted in “substantial evidence of criminal wrongdoing” according to the FBI: http://www.realclearpolitics.com/articles/2016/01/13/hillary_clintons_coming_legal_crisis_129293.html

^^^”The FBI reportedly has assigned some 100 agents full time to the investigation and another 50 temporarily.” Serial killers and individual terrorists don’t even get that type of attention.

According to public disclosures, by giving just 12 speeches to Wall Street banks, private equity firms, and other financial corporations, Clinton made $2,935,000 from 2013 to 2015. Think Hillary is a true liberal, standing up for the rights of the little man and those poorest in society? As the illegal Clinton foundation donations and the following article prove, make no mistake Hillary Clinton literally makes millions upon millions serving the interest of big business: https://theintercept.com/2016/01/08/hillary-clinton-earned-more-from-12-speeches-to-big-banks-than-most-americans-earn-in-their-lifetime/

Did you know Hillary Clinton regularly charges at least 225,000$ for a 30 minute speech? Not saying this is unethical or anything, after all it is business, but it is a staggering figure none the less. Recently she was paid 300,000 by the University of UCLA to deliver a commencement speech: http://www.cbsnews.com/news/behind-the-scenes-of-hillary-clintons-300000-speech-at-ucla/

There is a new movie being released in America honoring them men who died during the Benghazi tragedy of 2012. Some people say it is nothing more then a political witch hunt against Mrs. Clinton, and this may be fair. However the attack did happen under her watch, it was her duty as Secretary of State to protect consulates such as the one attacked. There was a multitude of false reports and disinformation surrounding the events of the attack: http://www.activistpost.com/2015/10/hillary-clinton-and-the-real-issue-behind-the-benghazi-scandal.html

As the Clinton’s moved out of the White House in 2001 it was widely reported that Hillary Clinton illegally stole 190,000$ in furniture, china, artwork and accessories. An investigation by politi-fact revealed that this number was too high, Hillary Clinton “only” stole 134,000$ worth of items from the White House: http://www.politifact.com/punditfact/statements/2015/oct/01/viral-image/viral-image-wrongly-accuses-clinton-stealing/

Honestly this list could go on and on, in fact it does. Rather then take the time and type out all the scandals covering her entire political career here for AnonHQ, someone has already taken the time to do this for us: http://www.wnd.com/2015/05/here-they-are-hillarys-22-biggest-scandals-ever/

If you are an American voter in the upcoming elections, keeping all of this information in mind, just ask yourself is this really the type of person we want representing society? Do you really want to cast a vote for President to someone like Hillary Clinton? Is there not one person in this entire country?

This article (44% of Americans Say They Will Vote Hillary For President. After Reading This They May Reconsider That Vote) is free and open source. You have permission to republish this article using a creative commons license with attribution to the author and AnonHQ. Join the conversation at www.anonboards.com