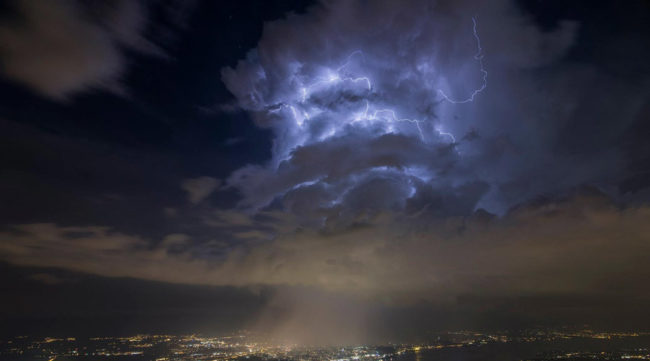 Breakout your tin foil hat, its about to get weird. Last week an incredible cloud formation and subsequent thunderstorm was photographed directly over the CERN Large Hadron Collider in Switzerland, prompting many conspiracy theorists to claim the facility opened a portal into another dimension.

“Are you conCERNed yet?” asks a tin foil hat fear-monger on Youtube. “If not, you should be” he warns. This is not the first time conspiracy theorists have claimed CERN opened a portal into another dimension. In 2015, CERN unveiled a new statue of Shiva ‘the destroyer’ outside their main facility, prompting many to conclude that CERN must have opened a portal to another dimension and directly contacted the deity. Adding fuel to the fire, just as the statue was unveiled, a deadly earthquake struck India.

For those of your tin foil hatters who refuse to accept this was nothing more than a thunderstorm, The Freedom Fighter Times has a video right up your ally.

This article (Supercell or Supernatural – Unbelievable Storm Rages Above CERN) is a free and open source. You have permission to republish this article using a creative commons license with attribution to the author and AnonHQ.  Join the conversations at www.anonboards.com.