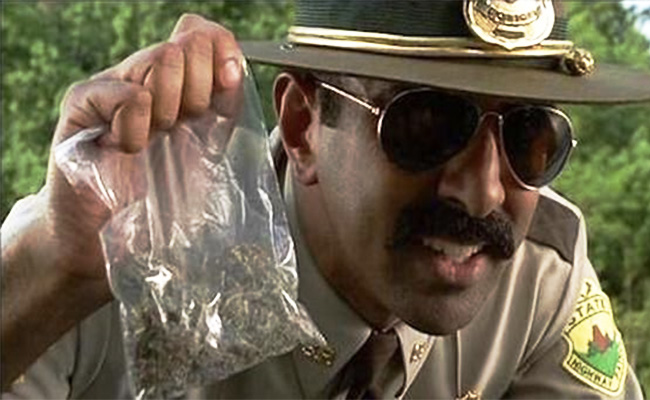 A recent survey of police departments across the United States conducted by the Justice Department, shows that police in general believe that marijuana is the least problematic drug when compared to the likes of cocain, methamphetamine, heroin and prescription drugs. This should really come as no shock, as attitudes in the US and around the world have shifted toward legalization and tolerance when it comes to pot use. The survey of 1100 police departments, conducted over a period of eight years, showed that all other drugs battled it out over time for biggest threat as perceived by law enforcement. Marijuana consistently remained at the bottom of the list, which is properly called The 2015 National Drug Threat Assessment Summary. The survey should be titled The 2015 National Controlled Substance Threat Assessment Summary, because that is what they are really talking about here. Calling it a drug survey allows them to continually keep marijuana lumped in with obviously dangerous substances. When people hear the word drug, they automatically associate negative connotations associated with hard drugs and the stereotypes that have accompanied them for years. The survey dos not account for other abused substances not commonly grouped together under the drug label like caffeine, alcohol, tobacco. Marijuana is still a controlled substance, not because of its effects or danger, but for reasons that I truly don’t believe anyone knows at this point.

In August of this year, The U.S, National Cancer Institute admitted that THC found in marijuana, kills cancer cells. The report produced by the NCI stated, “Cannabinoids may inhibit tumor growth by causing cell death, blocking cell growth, and blocking the development of blood vessels needed by tumors to grow. Laboratory and animal studies have shown that cannabinoids may be able to kill cancer cells while protecting normal cells.” The report also suggested that marijuana could be used to reduce inflammation of the colon and possibly reduce the chance of colon cancer.

The biggest obstacle to wide spread acceptance of marijuana and its uses medicinally and recreationally is its standing on the federal scheduled list of controlled substances. As a schedule 1 drug, marijuana is deemed to have no medicinal value, which as stated above, is now confirmed as false. As the science is now in, it is only a matter of time before conservative views toward drugs and drug use shifts and it becomes universally recognized as a health issue instead of a criminal justice issue. Surveys of law enforcement as the one conducted by the DOJ, serve only to aid the growing marijuana movement. First the medical community and now law enforcement have come forth and confirmed that marijuana is not a threat. The next step is to update the laws to reflect the science and the attitudes now present in our society.