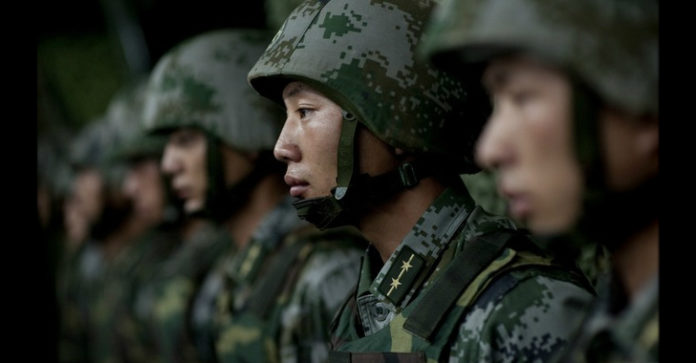 By James Holbrooks at undergroundreporter.org

Syria — According to state-run Chinese news outlet Xinhua, the Chinese military — citing remarks made by a high-ranking military official during a rare trip to Damascus — is seeking closer ties with war-torn Syria, offering to supply humanitarian aid and even train Syrian military personnel.

On Tuesday, the Director of the Office for Military Cooperation of China’s Central Military Commission, Guan Youfei, flew to Damascus to have discussions with Syrian Defense Minister Fahad Jassim al-Freij, Xinhua says. Director Guan, speaking with Xinhua, noted historical ties between the two countries and highlighted the positive role China has played in seeking a resolution to the fighting in Syria.

Reuters points out that Xinhua, paraphrasing Guan’s words, states: “China’s and Syria’s militaries have a traditionally friendly relationship, and China’s military is willing to keep strengthening exchanges and cooperation.”

China depends on the Middle East for oil imports, but in the past has tended to leave diplomacy to member nations of the U.N. Security Council — chiefly, the U.S., Britain, France, and Russia. However, China has inserted itself more deeply of late.

“But China has been trying to get more involved, including sending envoys to help push for a diplomatic resolution to the violence there and hosting Syrian government and opposition figures.”

The news comes as Syrian government forces, backed by Russian airpower, have established a siege around Aleppo, the last remaining enemy stronghold. Syrian and Russian forces have established humanitariancorridors for which civilians and even rebel fighters can escape — and maintains daily ceasefires for them to do this. Given these developments, it appears the last stand of the rebels may be imminent.

As Underground Reporter has previously written:

“All evidence points to the fact that the Syrian government is attempting to give the rebels within Aleppo a chance to surrender without further bloodshed. The rebels, however, appear steadfast. It was recently reported that 7,000 fighters are headed toward Aleppo from the southwest.”

Interestingly — and, to be sure, concerningly — Xinhua noted that while Director Guan was in Damascus on Tuesday, he met with a Russian general; though the agency provided no further comment on the matter.

In April, China sent a special envoy to Syria in order to work toward a peaceful resolution to the conflict. The man sent to participate in the talks had previously “praised Russia’s military role in the war, and said the international community should work harder together to defeat terrorism in the region,” according to Reuters.

The prospect of Chinese involvement in Syria could prove troublesome to that very “international community.”While, thus far, China hasn’t demonstrated a desire to involve itself in the fighting directly, its presence will almost certainly escalate tensions between itself and the United States.

Remember, the U.S. and China are on the verge of all-out naval warfare in the South China Sea, with neither side willing to give an inch. Recall also that U.S.-led NATO is in Eastern Europe, along the border with Russia, conducting what many have called provocations in an attempt to elicit a response from the Russian military.

Now, with China’s presence in Syria — and on the side of Russian and Syrian forces, no less — the last remaining global superpower has injected itself in the most hotly-contested military conflict on the planet.

“Which means that at this moment, every major world superpower is officially involved in the Syrian war, which has on various occasions been aptly called a powderkeg for what may be the next global military conflict — to be sure, all required players are now officially involved.”

This article (Syria Becomes World War Powderkeg as China Joins Russian Alliance With Assad) is free and open source. You have permission to republish this article under a Creative Commons license with attribution to James Holbrooksand UndergroundReporter.org. If you spot a typo, please email the error and the name of the article to [email protected]. Image credit: Flickr/Times Asi.