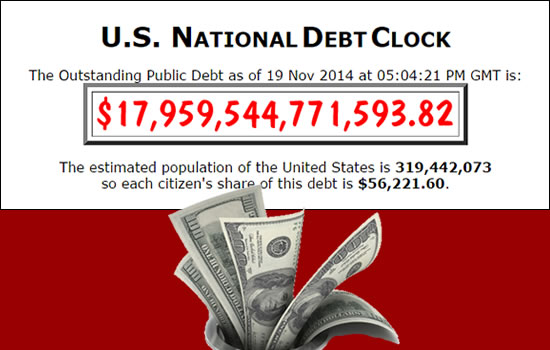 17.9 Trillion dollars… Trillion.  That is the US national debt right now. The “unfunded liabilities”, are somewhere around 250 trillion*** (being vague of course) Got that? It seems to be a bit more than a pocket full of shells. How exactly do you wrap your mind around a number like that? You can try just writing it down. It looks like this: $17,900,000,000,000. It still doesn’t seem real. (Click to enlarge the picture below)

US Debt To Foreign Countries

Bravo! for being able to get that car and being able to put that arithmetic into perspective! You are definitely ahead of the curve in some cases!

In a world where the rich are getting richer, the poor worse off and the middle class disappearing?  You rock! Keep up the great work!

How about that 18 trillion though? All kidding aside, we know there are people out there who have the prowess to understand these high end numbers that seem to come from an old science fiction movie because they work with them every day. Unfortunately there’s just as many people who rely on fingers plus toes equals 20 (men, if you’re creative you can get to 21). How do you even attempt to break down or compare something like this so that anyone and everyone can understand the gruesome reality of it?

According to “Notes for Apres la Guerre Part 2: Banking and Financial Market Theory”

How do we define the sizes of economies?  In dollars?  Nope.  These systems should be measured in terms of a transcendent, invariant unit.  Currencies are, by definition, variant, because they are constantly changing relative to one another.  This includes the dollar, which is itself measured against a BASKET of other currencies.  I propose that GDP should be measured in the unit of MAN HOURS or MAN YEARS.  $20 per hour average wage.  2000 hour average work year.  Because the buying power of an average man hour or man year shouldn’t change much at all.  Think about it.

Puts a different spin on it, huh?  Now, you really want your mind blown? Now do it with the unfunded liabilities of the FEDGOV (conservatively $250 trillion). Ok, who understands “man hours” or “man years”? That’s what I thought.

That helps it all make sense now doesn’t it? If all that did was perplex you even more, hit the old reset button on your mind and let’s try to get this into some sort of perspective everyone can grab hold of.  Let’s just hang with the $18 trillion dollar debt. Pretty much everyone out there in internet-land is familiar with New York City. The city that never sleeps, The Big Apple etc…  According to labor stats* (To make things a little easier, we’ll round off the numbers) there are a little more than 3,500,000 that work full time in NYC every day. The average median income is approx. $63,000 a year. SO! In one year (before taxes) those people will make a little more than 220 Billion dollars. So far, so good.

The average working life of one person is say… 50 years. So long as the number of working folk stays the same (due to new workers and retirees rotating through) We can do some “not so fancy” math and figure out that if every single worker would give every single dollar toward the debt, (drum roll please) your GREAT grandchildren would still have about 7 trillion dollars left to pay! If the train stayed on the track? THEIR great grandchildren might actually see a zero balance! It would only take about 7 generations of all of their families by very rough calculations. If you and the family want to eat and have a room to live in, it may take slightly longer. It’s definitely not an appealing idea is it?

Let’s have ourselves a silly comparison now. Some sources claim that the stack of money required to pay the 18 trillion would be as high as a skyscraper. How many people have actually seen one in person though? According to map software, the distance between NYC and San Francisco is  about 2900 miles. A $100 bill is 6 inches long. If lay out $100 bills end to end from NYC to San Francisco you would have $3,026,400,000 (3 billion plus dollars). If you used packs of 100 instead of single bills? You would have a little over 3 trillion dollars laying on the roads.  (which is probably the closest any of this money would ever get to the roads). Finally, if we lay 5 more lines of these $100 bill packs alongside the first? We now have a 15 inch wide strip of money a half an inch thick running from one coast to the other just to pay of our basic debt.

Let’s go one more comparison. A football field…  Even if you cannot stand American football, you still probably know how big a football field is right? I’m referring to just the field, not the end zones. 100 yards (91 meter) long, 53.3 yards (49 meter) wide. If we covered the field with stacks of $100 bills from side to side and end to end the stack of hundred dollar bills would be a little taller than the average two story house.  Are you angry yet? Make sure to call your local politicians and thank them.