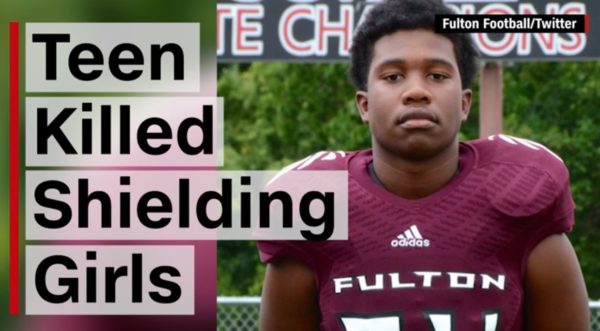 On December 17 2015, three gunmen went on a shooting spree in the city of Knoxville in Tennessee, United States.

The gunmen reportedly drove to the neighborhood of a teenager named Zaevion William Dobson and opened fire as people in the area prepared to celebrate Christmas. Zaevion was reportedly close to three girls when the gunmen arrived in their vehicle. When the gunmen opened fire, Zaevion jumped on the three girls, shielding them from the indiscriminate bullets fired.

When the gunmen finally drove off, it was realized that Zaevion had been shot in the head and killed. The three girls he shielded were unhurt, surviving the horrible attack. The suspects were given a hot chase by the police. Their vehicle crashed, the driver suffered a gunshot wound and later died. The two other suspects who were with the driver fled the scene, but they were later arrested by the police. Zaevion was aged 15 when he died. He was a high school football player at Fulton High School in Knoxville, playing for the Falcons. When the news of Zaevion’s act was made public, many honored and paid tribute to him for sacrificing his precious life to save the three girls.

In January 2016, President Barack Obama officially eulogized Zaevion in a speech. Mr Obama said:  “He wasn’t in the wrong place at the wrong time; he hadn’t made a bad decision. He was exactly where any other kid would be. Your kid. My kids. And then gunmen started firing. And Zaevion, who was in high school hadn’t even gotten started in life dove on top of three girls to shield them from the bullets. And he was shot in the head and the girls were spared. He gave his life to save theirs, an act of heroism a lot bigger than anything we should ever expect from a 15-year-old.”

However, the latest news about Zaevion is that he has been honored with the prestigious Arthur Ashe Courage Award this year.

Zaevion’s mother, Zenobia Dobson received the award on behalf of her late son. She was accompanied to receive the award by Zaevion’s brothers, Zack Dobson and Markastin Taylor.

“The family of Zaevion William Dobson accepts with great appreciation the honorable Arthur Ashe Award on behalf of our beloved young man of valor, who sacrificed himself to save others,” Zenobia said on behalf of the Dobson family.

She also paid tribute to Mr Ashe, saying the tennis legend proved to humanity that life is not about oneself alone, but it is also about caring for others. She said: “Arthur Ashe was a leading example of strength and courage for us as a family, and we feel truly blessed and honored that our Zaevion joins the ranks of honorees. Like Arthur Ashe, Zaevion faced obstacles, but he overcame them. With this award, we know that Zaevion’s name and example will never be forgotten.”

The Arthur Ashe Courage Award was instituted to remember the tennis legend, Arthur Ashe, who is said to have dedicated his entire life to human rights advocacy. The award is presented annually to a person whose contributions transcend sports just like Mr Ashe. The award was started in 1993. Notable personalities to have been honored with the award include Jim Valvano,  Muhammad Ali,  Billie Jean King; Todd Beamer, Mark Bingham, Tom Burnett and Jeremy Glick.

This article (Teen Who Died Shielding Girls from Gunfire in Tennessee Honored with Arthur Ashe Courage Award) is a free and open source. You have permission to republish this article under a Creative Commons license with attribution to the author and AnonHQ.com.