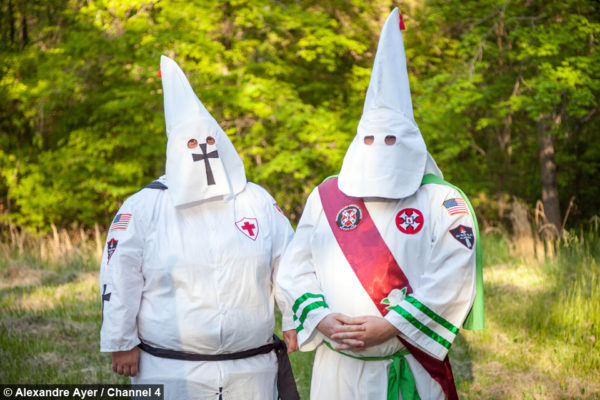 Two police officers have been removed from the police force in the state of Florida, United States, over allegations that they belong to a local branch of the White Supremacist group, the Ku Klux Klan (KKK).

According to the Fruitland Park police, Deputy Chief David Borst, 49, resigned; while Officer George Hunnewell was sacked after allegations were made against them that they belong to the KKK in a confidential FBI report. The FBI later handed the report to the Florida Department of Law Enforcement (FDLE) to look into it for appropriate sanctions against the two men.

Deputy Borst is said to be a veteran officer with more than 20 years of law enforcement service. He also served as the chief of Fruitland Park fire department. Borst reportedly denied belonging to the KKK, but resigned his two posts on Friday, July 8. He has since requested for time to speak with his family. According to Isaacs, officer Hunnewell had been demoted from corporal in 2013 and received five ‘letters of counseling’ in the past year. The Orlando Sentinel quoted Isaacs as saying these words about Hunnewell: “I just had no faith in him.”

Isaacs admitted that it is not a criminal offense to be in the KKK, but the FDLE referred the FBI document to him to consider how the allegations might affect the officers’ credibility and the perception of the department in the community. According to the FBI, Hunnewell and Borst names surfaced as part of an international probe being conducted by the agency. FBI officials said after their probe, they turned the report over to the FDLE to look into the standards and ethics policies to see what action should be taken against the two officers.

FDLE officials unanimously agreed that the case was not criminal and thereafter referred the matter to chief Isaacs to take actions based on his judgement, and in accordance with the ethics of the police department.

The FBI has assured chief Isaacs that there are no other officers in the Fruitland Park Police Department (FPPD) involved in the case, apart from these two men. It is said the FPPD has 13 full-time and five part-time officers, and many of these officers were trained by Borst. This is not the first time an allegation has been made against FPPD Police of having links with the KKK. In 2009, Fruitland Park Police Officer, James Elkins resigned after pictures of him in uniform with a pointy Klan hood and robe surfaced publicly.

The KKK is a past and present movement in the United States, advocating extremist reactionary currents such as White Supremacy, White Nationalism, and anti-immigration. The group was notorious in the past for using extreme violence against groups, or individuals they opposed.

This article (Two Police Officers in Florida Forced to Step Down from Their Posts over Links with KKK) is a free and open source. You have permission to republish this article under a Creative Commons license with attribution to the author and AnonHQ.com.