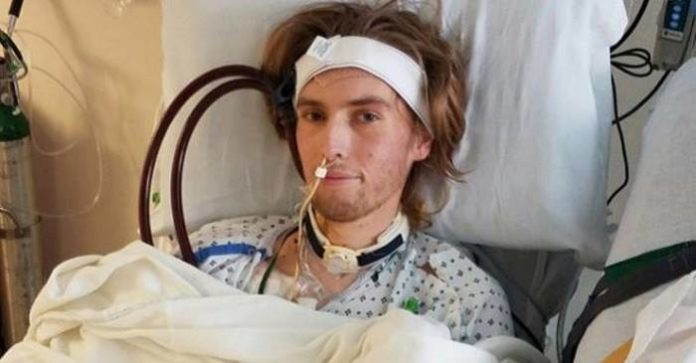 A nineteen-year-old Utah resident was denied access to a lung transplant because he tested positive for THC when doctors analyzed his blood.

Riley Hancey became seriously ill the day after Thanksgiving last year. He was determined to have the flu, which became pneumonia and developed into a rare lung infection. He was eventually placed on life support when his lungs collapsed and it became apparent they were not going to heal on their own.

But when it came time to put him on a transplant list, the fact that he had smoked cannabis the night before, on Thanksgiving, struck down his chances of the hospital performing the procedure for him.

According to Riley’s father, Mark, a doctor at the University of Utah hospital warned Riley, “You will die. You better get your affairs in order.”

But Mark claims his son’s use of the plant should not be a disqualifier when it comes to being eligible for an organ transplant. “Riley did smoke marijuana on Thanksgiving night with his friends,” Mark Hancey, told local outlet KSL earlier this week. “It’s not like he’s a smoker for 30 years and (had) deteriorating lungs because of that.”

He says Riley hasn’t used cannabis for over a year.

The university declined to comment on Riley’s case specifically but issued a statement to KSL explaining their policy is in line with international procedure and evaluates patients individually.

“We do not transplant organs in patients with active alcohol, tobacco or illicit drug use or dependencies until these issues are addressed, as these substances are contraindicated for a transplant,” the statement said.

Of course, if Riley only used cannabis one evening on Thanksgiving, it’s difficult to argue he has a “dependency.” But considering cannabis still remains illegal at the federal level and in many states across the country, it is, perhaps, unsurprising such rigid rules remain in place.

The family spent several months searching the country for a hospital that would perform the transplant, and two months ago, the Hospital of the University of Pennsylvania agreed. He was flown in at the end of March to receive a double lung transplant and is now making a successful recovery.

“He looked so healthy,” his father said. “It made all the difference, and he still looks healthy. … He’s still fighting, and he’s doing well.“

Though he was lucky enough to receive help, his case marks an ongoing time of uncertainty in the United States as much of the country aims to legalize while many institutions remain resistant to the changing times.

Marijuana remains illegal in Utah, including for medicinal use, though some lawmakers are slowly moving to change the law.