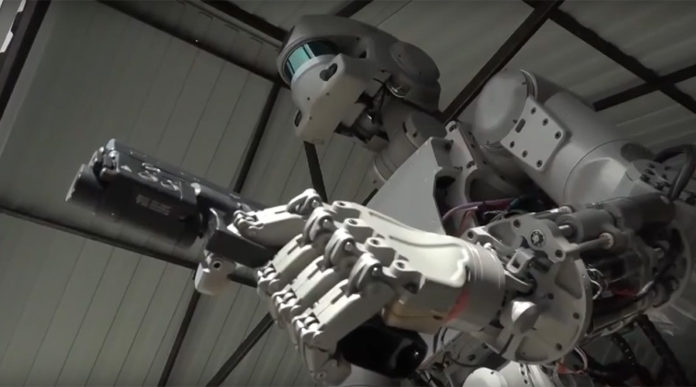 As part of Vladimir Putin’s strategic plan to conquer the Moon, Russia has built a terrifying human-like robot that can lift weights, screw in light bulbs, extinguish a fire, drive jeeps, drill holes, do press-ups, shoot guns, and travel to space. Christened FEDOR (Final Experimental Demonstration Object Research), the ‘cyber cosmonaut’ is expected to embark on a solo Moon mission in 2021.

“FEDOR was designed as an android robot able to replace humans in high-risk areas, such as rescue operations. For this purpose, it was necessary to teach him to work independently in an urban environment, navigate the terrain, drive a car, to handle special tools, provide first aid and other actions.

“In the autumn of 2016, FEDOR’s skills were demonstrated to move around uneven surfaces, including stairs, using tools such as a drill, and special equipment of rescuers — a jack, hydraulic unclamp and the like. At present, it is capable to drive a car — independently occupy and leave the driver’s seat, manipulate the pedals, turn on transmissions, steer.

However, after footage that revealed its frightening capabilities was tweeted by Russia’s Deputy Prime Minister Dmitry Rogozin, suggesting the combat robot is designed to kill humans, Rogozin was forced to issue an explanation:

“A robot of the FEDOR platform has shown skills of shooting with both hands. Work is underway on fine motor skills and decision-making algorithms. Shooting exercises is a method of teaching the robot to set priorities and make instant decisions.

“We are creating artificial intelligence, not Terminator. It will have a huge applied value for different spheres of life. Combat robotics is a key to building intellectual machines. This is applicable to areas including aviation and space.”

FEDOR stands 6-foot tall, weighs no less than 233 pounds depending on extra equipment, and can lift up to 44 pounds of cargo. Russian experts hope it will one day be able to help build a base on the Moon. “A key task for FEDOR will be to ‘assist in construction and use of bases’ on the Moon and potentially other planets,” said its Russian designers FPI.

But FEDOR’s ability to fire guns, combined with its existing decision-making algorithms, bring up nightmarish visions of humanity overtaken and enslaved by its own creations, writes attn:

“While people-eating robots and Russian space Terminators might seem like unchecked AI paranoia, the risks of artificial intelligence are real, and have worried leaders in the field for many years.

“And while FEDOR can drive a car and manipulate simple tools, robots are coming that could eventually take over the financial services industry, law, farming, hospitality, medicine, and complex construction. So in the end, it might not be an armed robot taking your life, but a skilled one taking your job.”

One of the developers of the project, the Russian Foundation for Advanced Research Projects, has announced a competition to create a software design for individual control for FEDOR. The contest will start on May 1 and run until February 28, 2018.

This article (Terrifying: Russia Builds Terminator-Style Robot that Shoots Pistols [VIDEO]) is a free and open source. You have permission to republish this article under a Creative Commons license with attribution to the author and AnonHQ.com.