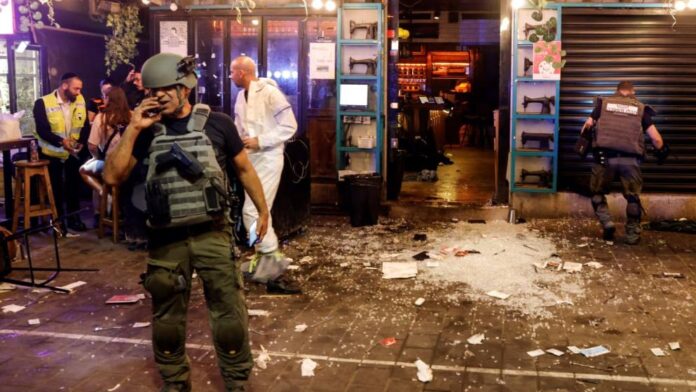 Ten people were shot in a terror attack in Tel Aviv, Israel, on Thursday night, according to authorities.

All of the victims were taken to Ichilov Hospital, with at least two in critical condition, according to the hospital and Magen David Adom, Israel’s national emergency medical service.

The emergency service said two of the victims were found unconscious on the sidewalk and underwent resuscitation, while four others taken to the hospital were conscious when medical personnel arrived at the scene.

Several other people at the scene were being treated for “stress symptoms,” according to Magen David Adom.

A gunmen has not been apprehended. Israeli police said they are searching for a single suspect.

Officials said “several” shootings took place at Dizengoff Street, Gordon Street and surrounding areas in Tel Aviv. Dizengoff Street is a major street that runs through Tel Aviv and has many shops, bars and restaurants and would have been bustling with activity on a Thursday night.

The attack Thursday is one of several recent terror attacks in Israel. There were three fatal terror attacks at the end of March. On March 30, five people were shot to death in Bnei Brak, east of Tel Aviv, by a man on a motorcycle who was later killed by police. One of the victims was a police officer, according to Magen David Adom.

Two days earlier, on March 28, two police officers were shot to death and four others were wounded in an attack. Then, a week prior, four people were killed in a stabbing attack in the southern Israeli city of Beersheba. The suspect was shot dead.

The Islamic State has claimed responsibility for most of the attacks.

“Horrified to see another cowardly terror attack on innocent civilians, this time in Tel Aviv,” U.S. Ambassador to Israel Tom Nides wrote on Twitter. “Praying for peace, and sending condolences to the victims and their families. This has to stop!”