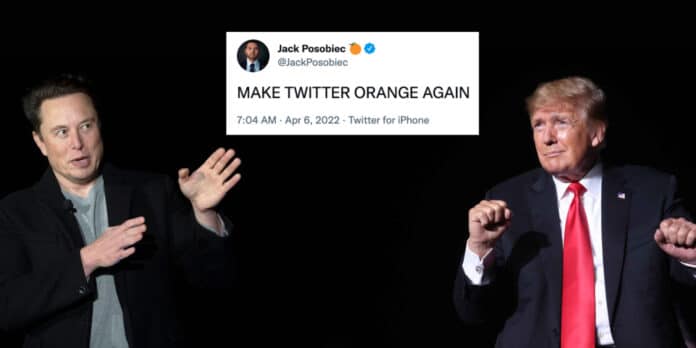 Last monday, it was announced that Elon Musk, the world’s richest man purchased $3 billion in Twitter stock, making him the largest stockholder in the company.

Before his massive stock purchase, Musk was asking questions about censorship on Twitter.

The richest man in the world posted a poll on Twitter on March 24, asking Twitter users if they believe the “Twitter algorithm should be open source?” In other words, should Twitter make public how they prioritize news?

The final results of the Twitter poll showed that 82.7% of the 1.17 million respondents believe that Twitter should make its algorithm public.

Only two hours ago, Twitter came out with a statement to inform Twitter users that they’ve been working on an edit button for one year, making it clear that it wasn’t Elon Musk’s idea. What people should be asking is why is it taking a company worth billions of dollars ONE YEAR to figure out how to edit comments on their platform?

Twitter says it has been working on an edit feature since last year and will start testing the feature in Twitter Blue Labs in the coming months (@twittercomms)https://t.co/aDRPN83Q5Uhttps://t.co/U5BjLfIn42

On March 25, the Tesla founder tweeted: “Free speech is essential to a functioning democracy?” Musk followed his statement with a question: “Do you believe Twitter rigorously adheres to this principle?”

The poll has not yet ended, but with only 6 hours remaining, over 70% believe free speech is NOT being adhered to on Twitter.

Under the poll, Musk wrote: “The consequences of this poll will be important. Please vote carefully,” leaving Twitter users to speculate that Musk is thinking about launching an alternative to Twitter. He certainly has access to the funds he would need to compete with the highly censored platform, and Musk once said, “I don’t create companies for the sake of creating companies, but to get things done.”

The consequences of this poll will be important. Please vote carefully.

Today, it was announced that Musk was invited to join the Twitter board after he purchased a 9.2% share of the company, giving conservatives hope that President Trump’s Twitter account, which was disabled after January 6th, would be restored.

Twitter quickly came out to squelch any rumors that they would be open to lifting the boot off the necks of conservatives on their platform, despite the public remarks about censorship on their platform by their largest shareholder.

‘Twitter is committed to impartiality in the development and enforcement of its policies and rules,’ the company told DailyMail.com on Tuesday. ‘Our policy decisions are not determined by the Board or shareholders, and we have no plans to reverse any policy decisions.’

‘As always, our Board plays an important advisory and feedback role across the entirety of our service. Our day to day operations and decisions are made by Twitter management and employees,’ the company added.

It should come as no surprise that Twitter isn’t interested in lifting the boot off the neck of conservatives. Former Twitter CEO Jack Dorsey’s replacement Parag Agrawal made it clear that they are not bound by the “First Amendment.”

Twitter CEO: Sure you can speak but our role is “who” will be heard.

Let’s see how long Mr. Agrawal sticks around now that there’s a new majority shareholder who believes in free speech at the helm of Twitter.