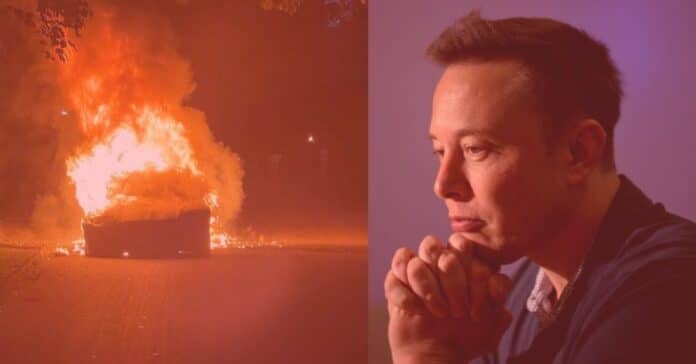 It’s no sooner than Tesla comes out with a new model that one is seen rolling down a suburban street, engulfed in flames, before exploding.

That was the case with one of the company’s new Model S “Plaid” vehicles and that was apparently the scene in a Philadelphia suburb, where pro-Tesla blog electrek noted that the vehicle had caught fire under what it called “strange circumstances”.

The incident took place in Haverford, Pennsylvania and the the Gladwyne fire department responded to the scene. They released the following statement:

“Gladwyne Firefighters responding to the 100 block of Rose Lane last night just before 9pm to assist Station 25 (Merion Fire Company of Ardmore) with a vehicle fire. While enroute to the call Chief 25 was advised that the reports were that a Tesla was on fire and it was well involved in fire. Engine 24 with a crew of 7 arrived on scene simultaneously with Engine 25. Due to prior training classes on Tesla Vehicle Fire emergencies, Engine 24 laid a 5 inch supply line into the scene so that we could keep a continual water stream on the fire to extinguish the fire and cool the batteries down to ensure complete extinguishment. Engine 24 and Engine 25 both deployed hand lines to extinguish the fire, each maintained a dedicated water source and continued to cool the vehicle down for almost 90 minutes.”

Photographs released by the fire department show firefighters attempting to put out the blaze, and – as we have seen in many cases of Tesla fires – the charred remains of the vehicle that once was. Attempting to offer up some form of analysis, electrek noted that the “exact circumstances of how the vehicle caught on fire are still unknown”. But the post also claimed that a witness from Narberth Ambulance, who was working as an EMT in the area and who was on the scene, said that “the call came in from one of the residents of the neighborhood who saw it rolling down the road on fire before exploding in front of their house.”

The blog post then turns on the spin, theorizing a number of potential causes for the fire except for negligence on the behalf of Tesla. “In this case, the most interesting thing is that the vehicle affected appears to be a brand new Model S Plaid, which is equipped with a new battery pack from Tesla,” electrek editor Fred Lambert writes, possible unaware of the argument he’s tacitly making. He concluded by stating the blog would wait for more information before drawing conclusions, and then suggests that “even arson” may have played a role in the fire.

But later in the day on Thursday, more information came to light when a Tweet appeared from a lawyer claiming to represent the owner of the vehicle

Our firm & @AthleteDefender represent an exec who purchased new Tesla Plaid Model S, which was 1/250 shipped. On Tuesday it spontaneously combusted. Our client was trapped & could have died. We tried reaching out to Tesla & have been ignored so far. This is car after escape. pic.twitter.com/wXyJXbWggJ

The lawyer claimed that the owner of the vehicle was trapped in the vehicle when it “spontaneously combusted”.

The lawyer said he was unable to reach Tesla so far.

So much for the arson theory, Fred.