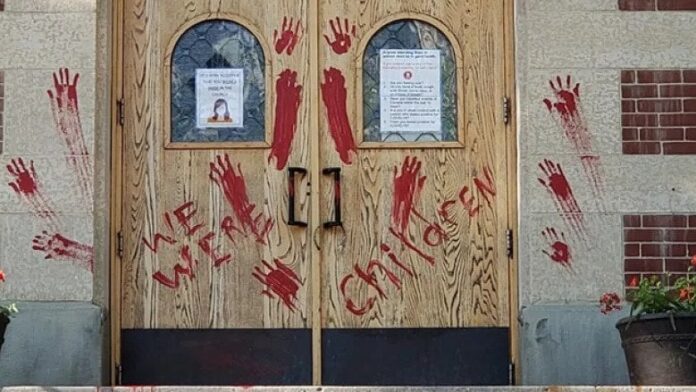 Red painted handprints and the words “We were children” covered the doors of St. Paul’s Co-Cathedral in downtown Saskatoon Thursday evening, following the news of an estimated 751 unmarked graves found at the former site of Marieval Indian Residential School on Cowessess First Nation.

Video of the event posted to social media showed a woman painting and splattering red paint on the door and the sign of  St. Paul’s Co-Cathedral.

Photos of the aftermath show the words “We Were Children” scrawled on the church door.

The Catholic Church has been criticized for its role in the residential school system, especially for its reluctance to provide records relating to burial grounds.

On Thursday, the Cowessess First Nation announced the preliminary discovery of 751 unmarked graves at the former residential school. The announcement caused shock and outrage across the country.

The finding comes after another discovery at the Tk’emlúps te Secwépemc First Nation in B.C. which announced the discovery of a burial site adjacent to the former Kamloops Indian Residential School. Preliminary findings indicate the site contains the remains of 215 children.

Father Stefano Penna, the priest at St. Paul’s Cathedral, said this was the second time this has happened to his church after the discovery of the remains of people at residential schools.

He said he understands the anger Indigenous people are feeling.

“My heart is broken at what was done in the name of Christ, but what was done actually more by acquiescing to a kind of government and social policy that sought to to ‘civilize and colonialize’ people by taking who they were, out,” he said.

“And this is an expression of that.”

Penna said he would like to sit down with the group that staged the event and listen to what they had to say.

“We have to stop seeing people as ideas, but to see people as people,” he said.

That’s what happened in the residential schools … These weren’t children and families with faces when the police came in and took them away.”

However, he said he does not agree with the actions.

“This objectively a crime. This is vandalism. This shouldn’t be done to any crosswalks with the rainbow flag or any mosque or any synagogue,” he said.

“We don’t ever solve anything that was hateful in the past by continuing to hate.”

An eyewitness said watching the event was a beautiful experience.

Cathy Bohachik was outside the cathedral commemorating the 60th anniversary of her parents’ marriage when roughly 20 people approached the area wearing orange shirts. Then one woman broke away from the group and began to paint the door.

“She started to do her artwork, and we were actually quite speechless.”

Bohachik was raised as a Catholic and said she had never heard of the residential school system growing up.

“It was the most amazing experience I’ve seen in Saskatchewan, ever,” she said.

“I was very emotional all evening long, and I was so grateful that I was there to see it.”

Bohachik said the woman was approached by police and ordered to leave. A spokesperson from Saskatoon police said no charges had been laid at this time.

Indigenous affairs columnist Doug Cuthand said he was not surprised to see something like this happen, given recent events.

He said First Nations people across the country have a lot of anger and resentment that has been built up over the years. He mentioned two Catholic churches that burned down on the Penticton Indian Band and the Osoyoos Indian Band this week, as well as the removal of a statue of Father Joseph Hugonard at Sacred Heart Catholic cemetery in Lebret.

“This is kind of something we’ve got to expect,” he said.

“The church has become a target and we can expect more of this in the future.”

While Cuthand said burning down churches was unacceptable, he said First Nations people have the right to be angry at the church for its role in residential schools.

“A lot of people remember getting their knuckles rapped by a nun or strapped by a priest,” he said.

“They’ve harboured all these feelings with them all these years. So, yeah, I expect this is going to overflow.”

By Friday morning, the paint had been removed and a security guard had been posted outside the church.