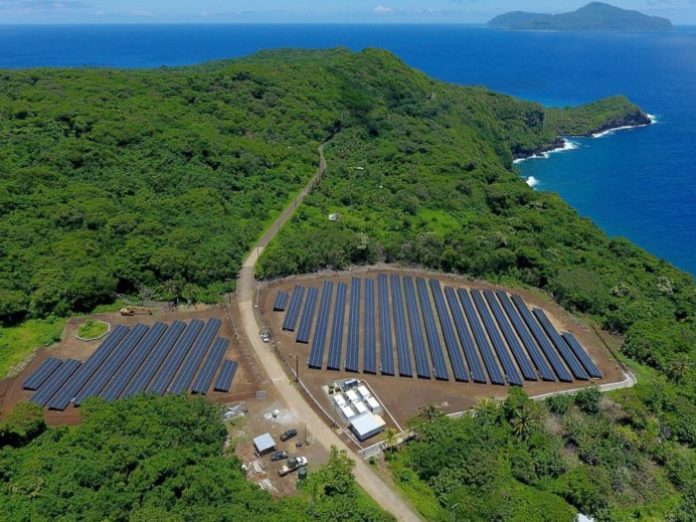 Tau is the largest island in the Manu‘a Group and the easternmost volcanic island of the Samoan Islands. Officially, the island is part of American Samoa in South Pacific, about 4,000 miles off the west coast of the United States. The island has completely migrated to renewable energy—with solar serving its population a dish of clean energy and putting an end to the electricity crisis on the island.

Before the move to renewable energy, the island was dependent on 100,000 gallons of diesel to survive. Apart from the huge cost, it wasn’t easy transporting the diesel to the island to power the generators. Bad weather prevented ferries transporting diesel from docking at the port of the island and during these periods, the island faced an energy crisis.

However, officials on the island have changed course, now having adopted a new and emerging technology that is changing energy production around the world. The island is now completely self-sufficient in the energy department. In 2014, island officials planned to change the island’s energy generation from fossil fuel to renewable sources. They immediately contacted Tesla Energy and SolarCity about the issue.

Utu Abe Malae, the Executive Director of the American Samoa Power Authority, said although it wasn’t easy to implement the island’s renewable energy plan, they were motivated to pursue it because clean energy is the future for the entire American Samoa.

“Shipping diesel has been a long-standing environmental risk and an inefficient use of taxpayers’ money,” Utu Abe said. When SolarCity engineers finished the solar panel installation, the Tesla Energy contractors took over. The company installed 60 Tesla power packs; serving as energy storage for the island when the sun isn’t available during night, and during rainy or cloudy days.

With this, the island of Tau is fully running on solar energy without worrying about intermittent power outages. Now that the Tau project has been successfully completed, the rest of American Samoa plans to become completely renewable by 2040.

Over the past months, we have consistently reported that Tesla Energy – led by Elon Musk – has completed the manufacturing of a new energy storage system to store energy for consumers; especially those using renewable sources such as the sun and the wind. In 2015, Musk announced the new energy storage equipment (known as Powerwall) can hold up to 10 kilowatt hours (kWh) of electric energy. The Powerwall is made from a rechargeable lithium-ion battery. It stores electricity for domestic consumption, load shifting, and backup power. The bigger variant, which is available for industrial use, is known as Powerpack and has a storage capacity of 100 kWh. The Powerwall has two different models, using two different generic cell chemistries. It uses proprietary technology for packaging and cooling the cells in packs with liquid coolant.  The daily cycle 7 kWh battery uses nickel-manganese-cobalt chemistry, and can be cycled 5000 times. The other is a 10 kWh battery and uses a nickel-cobalt-aluminum cathode like the Tesla models. It is designed for weekly or emergency use and has a higher energy density.

In August 2016, Tesla Energy agreed to buy SolarCity for $2.6 billion. The deal aims at enhancing the smooth operations of the two companies. According to Elon Musk, the acquisition of SolarCity is meant to strengthen the balance sheet of the two companies, allowing them to build an integrated product that combines electric vehicle charging, solar power, energy storage, installation and servicing of the whole system – creating a renewable energy boom. This article (Tesla and SolarCity Join Forces to Help a South Pacific Island Dump Fossil Fuel Energy) is a free and open source. You have permission to republish this article under a Creative Commons license with attribution to the author and AnonHQ.com.