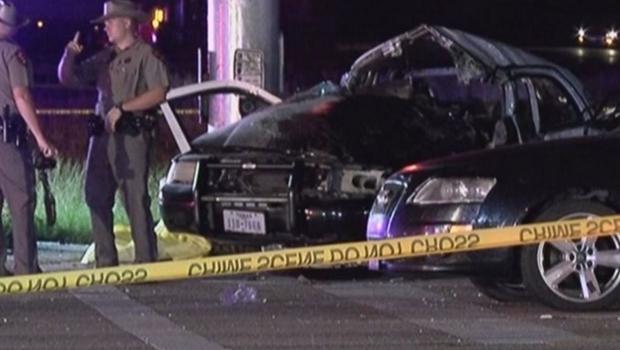 An eleven year old boy is dead after the SUV he was riding in collided with a Patton Village Texas police cruiser, after the officer ran the red light. The driver of the police cruiser, identified as Sgt. Stacey Baumgartner, was engaged in a pursuit of a suspected drunk driver. Baumgartner threw public safety out the window in order to engage in a pursuit, that not only took the life of an eleven year old child, but ended his life as well. This is another example of how the cure is worse than the disease. All too often police feel that the tactics employed to eliminate crime are justified, however this case once again proves that wrong.

Baumgartner was in pursuit of what he believed to be a drunk driver who fled from him. Garrett William Nee, 29, was the driver of the dark colored Scion that Baumgartner was chasing. Nee, who obviously shouldn’t have run from the cops, is now being charged in the deaths of Baumgartner and eleven year old child who has not yet been named by authorities. After seeing the crash in his rear view mirror, Nee returned to the scene where he was arrested and charged with two counts of intoxicated manslaughter and six counts of intoxicated assault. While many would place blame on Nee, the real problem here is police and their refusal to obey law and policy. Nee was charged due to the fact that police were chasing him and as a result of the chase, two people died and six were injured. Even though he had nothing to do with the crash itself, the law will find him responsible. Regardless of what you might have heard, police are not allowed to blow red lights during a pursuit. Every police agency that is governed by the state and overseen by CALEA, the law enforcement regulatory agency, has to abide by common safety rules. That includes making sure intersections are clear, before running through them. Standard policy at most police agencies dictate that an officer in pursuit must put public safety first, even if that means the bad guy gets away. The act of a vehicle pursuit is a violent one in and of itself. Officers are all trained in proper intersection crossing during pursuit, which involves coming to a near complete stop, flashing lights and sirens, and making sure no one is in the intersection before proceeding. Baumgartner did not do this. According to witnesses, the SUV that collided with Baumgartner’s patrol car, had the green light. It is the responsibility of the officer to notify drivers on the road, via light and sirens, that he needs to pass.

This is another example of “cowboy cop syndrome” where once that adrenaline kicks in, cops think they are above the law, and in this case above the laws of physics. Now, Nee, who was probably driving drunk, will have to pay the price for shitty police work. If Baumgartner had paid attention to the road, remembered his oath, and had a cool head about him, these innocent victims of police violence would be alive. While most won’t consider this an act of police violence, it most certainly is. It is indicative of more far reaching problems in the police world, which are all interconnected.