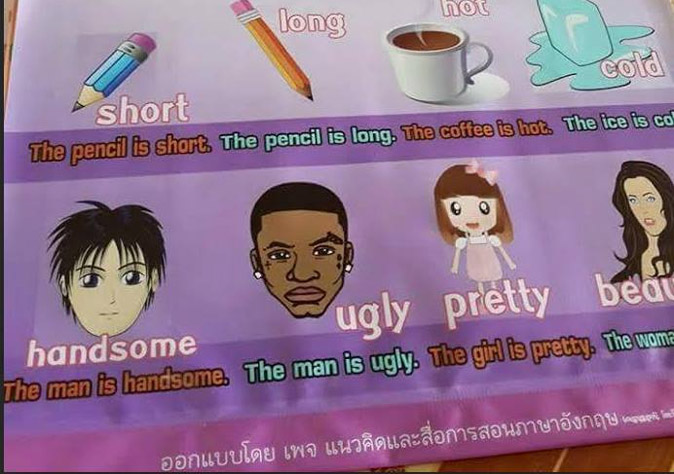 Every now and then a post is viewed on Facebook which will either go viral or create an uproar… or both. An American journalist, Michael Yon, experienced this in July when he posted a photo he had discovered was being given to young school children when being taught adjectives during class time. The illustration is designed to teach Thai children English adjectives by showing that dark skin is “ugly.”

At first glance, the picture cards are a straight forward learning tool: “The man is old,” “the pencil is long,” and, “the man is young.” There seems to be nothing wrong in this helpful and rather innocent poster entitled, “We are different.” That is, until you scroll down to the bottom where the differences that illustrate beauty are displayed. The Thai creators’ perception provides the word “handsome” with an illustration of a light-skinned cartoon character, with a complexion and haircut considered preferable in Thailand. Further along the poster, the word “ugly” is portrayed by a dark-skinned character, seemingly of African descent.

I know when I went to school, such descriptors would be portrayed by dinosaurs and monsters, not color and creed.

Since the posting by Yon has gone viral, the Facebook page where it seemingly was created for teaching materials has since been made unavailable.

This Article (Thai Children taught that Dark Skin is “Ugly”) is free and open source. You have permission to republish this article under a Creative Commons license with attribution to the author and AnonHQ.com.