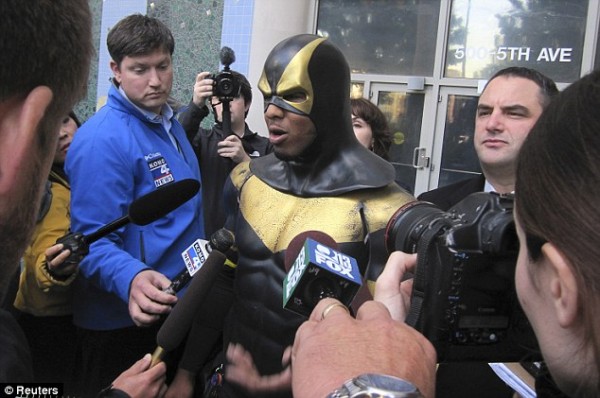 The Free Thought Project has reported that one of America’s most active superheroes, Benjamin John Francis Fodor, otherwise known as Phoenix Jones, stopped an attempted murder that was taking place on Capitol Hill in Seattle.

Jones, known for confronting alleged lawbreakers while dressed in a superhero costume, was said to have been patrolling the streets near Capitol Hill when he witnessed three men attacking a defenseless man with a weapon.

The men were said to be beating the man viciously, pistol-whipping and kicking him from left to right.  It was reported, that when Jones chanced upon them, he immediately sprang into action, chasing the men down and knocking the weapon away from the man holding it. Reportedly, Jones then kept the suspects cornered until the police arrived and arrested them. Police later said the victim was so badly injured that he would not be able to give evidence. In addition, the police also announced that Phoenix Jones had volunteered to give evidence of the attack that almost claimed the victim’s life.

“The bloodied victim in the incident wouldn’t provide officers with much information about the fight, but a witness–Seattle’s (in)famous masked adventurer, Phoenix Jones–told police he had seen the suspects pistol-whip and kick the victim after knocking him to the ground,” the police said in a statement.

Jones confirmed the incident and his intervention with the police live on camera. He said in a video posted on YouTube, “I sprinted out as fast as I could and hit him with a right hand. The gun popped out, only the scary part was he didn’t get knocked out.” Phoenix Jones is the leader of the Rain City Superhero Movement, a Seattle-based citizen patrol group that describes itself as a crime prevention brigade. Initially wearing a ski mask to intervene in a public assault, Jones later developed a full costume and adopted “Phoenix Jones” as a pseudonym.

He has said in the past that the best way to prevent being mistaken for a criminal by the police, is to wear a super-suit. However, local police have expressed concern that the strange costumes may lead to emergency calls from citizens who mistake the “superheroes” for criminals. All the members of the Rain City Superhero Movement are said to have a military or mixed martial arts background. Jones himself is a mixed martial artist. He has signed to World Series of Fighting, where he has fought at two catchweights; the brother of UFC, Strikeforce, and has also fought one Championship fighter, Caros Fodor.

This Article (Real-Life Superhero, Phoenix Jones Stops Attempted Murder in Seattle) is free and open source. You have permission to republish this article under a Creative Commons license with attribution to the author and AnonHQ.com