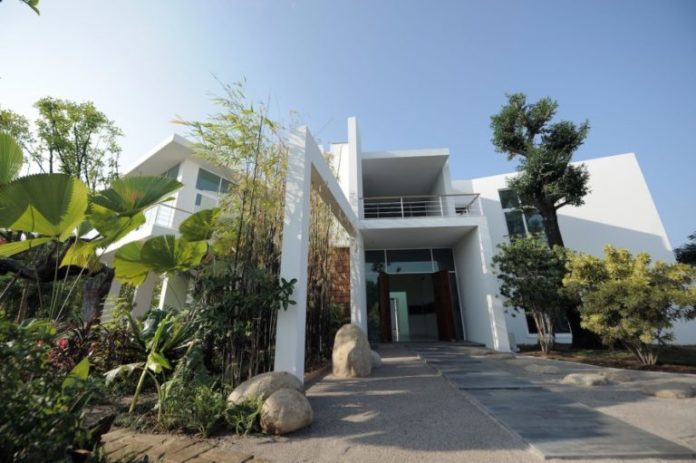 The new development is 100% self-sustaining.

A new and creative housing development has just topped the scale of sustainable living as the world’s first for energy storage of its size. The off-grid housing development is located in Chiang Mai, Thailand and is a huge progression in the journey towards greener living. Phi Suea House, developed by CNX Construction and owned by Sebastian-Justus Schmidt, is powered entirely using a solar-hydrogen system. The development is 100% self-sustaining, and provides 24-hour, year-round access to clean energy, even during periods of bad weather, through the solar-powered hydrogen storage system. It is comprised of buildings which include a workshop and guesthouses, although only five of the buildings, a large fishpond waterfall and a 400-square-meter swimming pool with a well pump, require any electricity.

The structures are all fitted with solar panels and have their own inverters. A central energy storage system receives all of the electricity, which is then distributed to the areas that need it at specific times. 86kW of photovoltaics provide an average daily power production of 326.8kWh, which is an amount that surpasses the Phi Suea House’s monthly 6,000kWh energy demand. Any excess solar energy that is produced during the day is then used to power anion exchange membrane electrolyses, that split water into its constituent elements. As oxygen is released into the surrounding air, the hydrogen is stored in tanks, which the fuel cells convert back into electricity during the night.

There are many advantages for using hydrogen energy storage when compared with typical batteries, such as larger storage, no unwanted byproducts, and a long storage life. However, the project is also equipped with two 2,000-Ah lead-acid battery banks as a buffer and back up just incase, although they are not discharged more than 10% in a single cycle. The carefully thought out and innovative energy efficient design of Phi Suea House helps to reduce their energy demands due to features such as aerate concrete walls, double-glazed windows, natural ventilation, green walls, smart ceiling fans, and sun path analysis to reduce the homes’ dependence on air conditioning. It also features a solar hot water system that heats the water without the need for electricity, whilst rainwater is constantly collected and treated onsite for reuse as irrigation. Their consistent performance technology is also used for future improvements, as energy performance data will be collected and used for research at Nanyang Technical University in Singapore. Sebastian-Justus Schmidt said,

“Everyone should do something to live in a better world. Our family is now doing our part – leaving the world a greener place while gaining and sharing knowledge. This is without a doubt worth all efforts. We aim to have the lowest ecological footprint possible – especially as a foreigner in another country.”