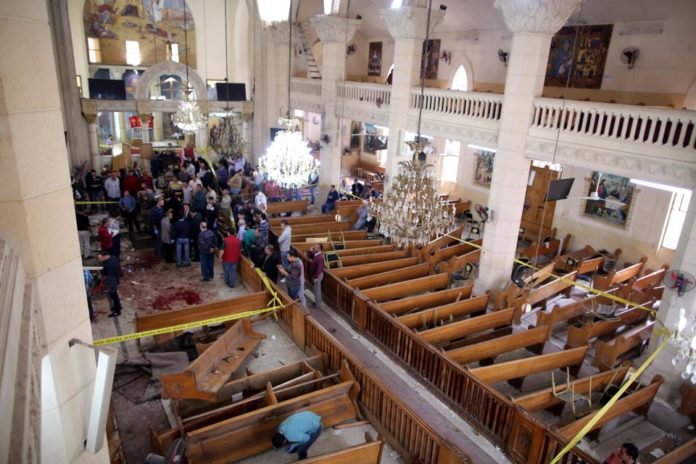 A three month state of emergency has been declared in Egypt after two suicide bombings have left at least 44 Christians dead and 126 wounded.

The two suicide bombings targeted those celebrating Palm Sunday at Coptic churches in Alexandria and the Nile Delta city of Tanta located 50 miles from Cairo, and were carried out by Islamic State militants.

In Tanta, St. George’s Cathedral main doors had already been sealed to prevent attacks, were bypassed by the attacker, where he blew himself up at the altar. Around 78 were injured and 27 men, women and children were killed in the deadly explosion. The priest giving the sermon lost his son in the attack.

Two hours later, the second attack occurred in Alexandria, when a bomber entered St Mark’s Cathedral, also bypassing a metal detector and security. A further 48 were wounded and 17 killed.

Out of Egypt’s 90 million people, Christians make up 10 percent of the population; and were the most vocal in support for President Abdel Fattah el-Sisi’s rise to power after ousting elected Muslim president Mohamed Morsi.

These attacks are some of the deadliest acts against Christians in Egypt in decades. The challenge of Islamic violence is said to “undercut” Trump’s praise for Egyptian President Abdel Fattah el-Sisi’s ability to combat the Islamic State and keep Christians safe. President Trump said only last week that he was willing to overlook el-Sisi’s human rights breaches of mass detention and torture in favour of el-Sisi combating terrorist factions.

The Obama administration barred el-Sisi four years ago from the White House after he seized power with a military takeover.

The suicide bombings have seen el-Sisi deploy military to churches across the country, attempting to protect the more vocal Christian supporters against further attacks.

“I won’t say those who fell are Christian or Muslim.” President el-Sisi said in a speech shown on state television after the attacks. “I will say that they’re Egyptian.”

In both suicide bombings, a single bomber slipped past security to gain access to the service in the churches, highlighting the difficulty of containing and detecting suicide bombers.

The New York Times reports that Egyptian intelligence agencies had failed to “anticipate a coordinated wave of devastating attacks.”

Pope Francis was already scheduled to visit Egypt at the end of this month on April 28 and 29.

This article (IS Suicide Bombings in Churches Against Egyptian-Christians Leave 44 Dead, 126 Injured) is a free and open source. You have permission to republish this article under a Creative Commons license with attribution to the author AnonWatcher and AnonHQ.com.