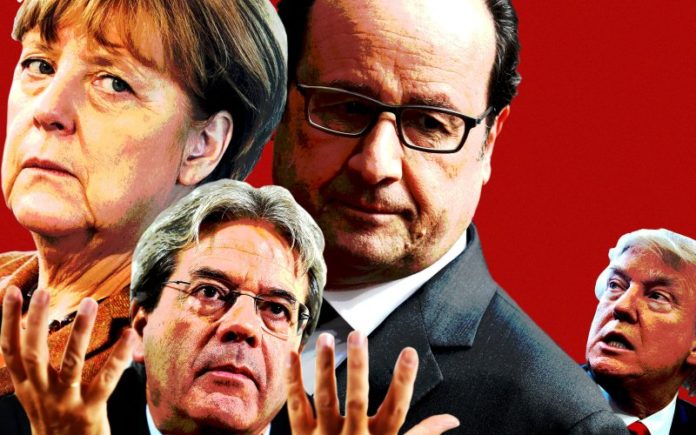 MALTA – This week European officials met with each other in Malta to discuss Europe’s overwhelming refugee crisis. The Malta Summit, however, fast turned into a dialogue about what to do about the United States’ new president, Donald Trump.

Intended or not, Trump has initiated an isolation movement for the US. After the migrant front was discussed, the tone deemed Donald Trump a greater threat than the refugee crisis.

The Muslim ban; the planned wall to keep out the Mexicans; and moreover, the interfering in Europe’s affairs have cooled relations between Europe and the US.

Prime Minister Teresa May’s offer to be the “bridge” that helped smooth over issues between Europe and Trump’s America, didn’t sit well with European officials.

Lithuanian President Dailia Grybauskaite told the BBC in response to Prime Minister May’s offer, “I don’t think there is a necessity for a bridge—we communicate with the Americans on Twitter,” admonishing Trump.

The French President, François Hollande also had less than kind words to offer Trump. “What is at stake is the very destiny of the European Union. It is unacceptable that there should be, through a number of statements by the U.S. president, pressure on what Europe should be or what it should no longer be.” Hollande continued firmly, “We must protect our commercial interests when they are threatened.”

Angela Merkel, the German Chancellor also reiterated Hollande’s thoughts for a more united Europe. “I believe the stronger we state clearly how we define our role in the world, the better we can take care [of] our transatlantic relations.”

From the Maltese Prime Minister Joseph Muscat, who summed up the concerns echoed at the summit for the members of the European Union, was quick to say there was no hate for the Americans, just hate for your president.

“Obviously there was concern among the EU 28 on some decisions that are being taken by the new U.S. administration and some attitudes that are being adopted by the said administration,” Prime Minister Muscat said, ““Nevertheless there was no sense of anti-Americanism. There was a sense that we need to engage with the United States just the same, but we need to show that we cannot stay silent where there are principles involved.”

Trump’s move to presidency has spurred the world into action. His lack of affection for the EU has spurred on European unity, something that had been long lost for some time.

On the other side of the world, Australia and China are also showing unity.

China expresses time and again the importance of Australia in their foreign policy, both as an ally and economic partner. There was even talk about dumping the ANZUS alliance from a lead Australian professor.

Turnbull went on record saying that Australia will not be bullied. Bob Carr, the former Labor Foreign Minister has said “this is a healthy thing for Australia.”

Foreign relations are shifting. If isolationism was what Trump wanted, he may very well have just had his wish granted.

This article (The 2017 Malta Summit for EU Leaders Exposed a United Front Against Trump) is a free and open source. You have permission to republish this article under a Creative Commons license with attribution to the author AnonWatcher and AnonHQ.com.