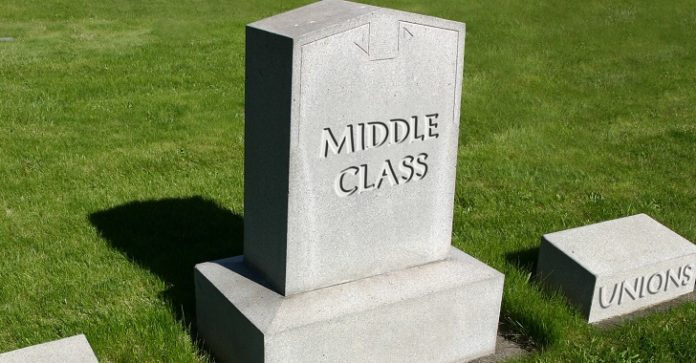 By Deirdre Fulton at theantimedia.org

“The hollowing of the middle class has proceeded steadily for four decades, and it may have reached a tipping point,” Pew Research Center says.

For the first time in more than four decades, middle-income households have lost their majority status in the U.S., according to new findings, and are now outnumbered by their counterparts on opposite ends of the income spectrum.

Based on the definition used in the Pew Research Center report released Wednesday, the share of American adults living in middle-income households—that is, with an income that is two-thirds to double that of the overall median household income, or $42,000 to $126,000 annually in 2014—has fallen from a high of 61 percent in 1971 to 50 percent in 2015.

“The hollowing of the middle has proceeded steadily for four decades, and it may have reached a tipping point,” the Pew study suggests. Furthermore, a “closer look at the shift out of the middle reveals that a deeper polarization is underway in the American economy.”

“The movement out of the middle-income tier has been more than just a step in one direction or the other,” the report says. “The fastest-growing segments are the ones at the extremes, the very lowest and highest ends of the income distribution.”

In addition, middle class families have fallen further behind financially, the study shows, with the share of U.S. aggregate household income held by middle-income households having “eroded significantly over time.”

The Pew findings support what many 2016 presidential candidates, led by U.S. Sen. Bernie Sanders, have beensaying on the campaign trail.

In an op-ed published this summer, Sanders decried what he called “the war against the American middle class,” marked by Wall Street greed, anti-worker policies, and corporate tax evasion.

And on Thursday, he tweeted:

There’s been a massive transfer of wealth from the 99% to the top 1%. We’ve got to bring that money back to working families.

A Wall Street Journal/NBC News poll in January found that 47 percent of respondents considered reducing income inequality an absolute priority for the government to pursue this year, with Democrats placing far greater importance on it than Republicans.

In a piece for Gawker on Thursday, Hamilton Nolan responded to Pew report with an irreverent eulogy.

“The Middle Class, a popular figure in American folklore, died this week after a long battle with capitalism,” Nolan wrote. “Its passing has been expected since the recent death of its partner, The American Dream.”