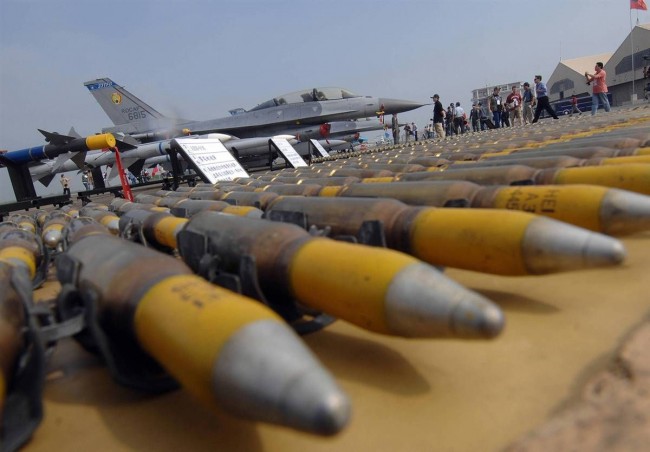 Stocks of leading weapons manufacturers are beginning to soar as France vows for retribution, asking for unity to bomb IS, and reports that there will most likely be a U.S. military escalation against the Islamic State continue to surface. Many began to take notice Monday morning as the “defense industry’s” stocks began to soar, with corporations such as Lockheed Martin showing significant increases throughout the day:

As mentioned in one of our previous reports:

Within all this [media] coverage, it is being said that the Paris attacks bore a sophistication level that hasn’t been seen since al Qaeda’s attack on 9/11, and the London transport attacks of 2005, both of which many around the world believe were false flag attacks. Now reports are surfacing that the Paris attacks may lead to a military escalation against the Islamic State by the United States.

Similar to both 9/11 and the 2005 London transport attacks, we are now finding out that an emergency attack drill in Paris (very much akin to the attacks themselves) was ongoing Friday morning, the day of the attacks. In a translated interview given by Patrick Pelloux, an emergency medical services specialist, and a first-responder:

“As luck would have it, in the morning at the Paris SMAU (EMT), a multi-site attack exercise had been planned so we were prepared. What needs to be known is there was a mobilization of police forces, firemen, EMTs, associations who came [to participate] and we tried to save as many people as possible.”

We’ve gotten reports that French authorities had prior knowledge of the attacks—yet again another similarity to 9/11 and the 2005 London transport attack—and some reports claim that this accumulated evidence suggests the Paris attacks may have been an operation designed by Western intelligence for the purpose of gaining support for more intervention in Syria by Western forces. As for weapons manufacturers, their goals are clear; aid the terror-propaganda, violence, and imperialism to make an obscene profit off the destruction of human life.

Unfortunately, we find ourselves involved in a game of “the little boy who cried wolf.” We see the military-industrial-complex once again making a financial killing, and for as smart as the U.S. and various Western nations think they are, they have a nasty habit of using the same tactics over and over again, leaving patterned trails in their wake which are visible as well. Is it any wonder after all the lies, deceit, and manipulations (not to mention false flag operations) that no one trusts them anymore?

This Article (Who is Profiting from the Paris Attack?) is a free and open source. You have permission to republish this article under a Creative Commons license with attribution to the author and AnonHQ.com.