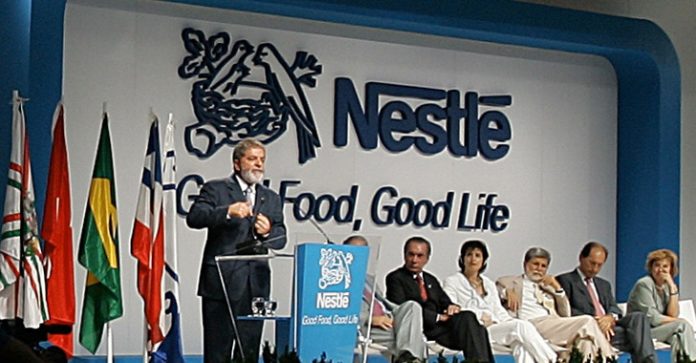 Nestle’s apparent hypocrisy has once again made headlines. After admitting in November it haddiscovered slave labor among its seafood suppliers in Thailand — where migrant workers from Cambodia and Myanmar were being sold as disposable commodities and forced to fish and process seafood under horrific conditions — it appeared the company was prepared to more thoroughly vet its supply chain to ensure fair labor practices were the norm.

“As we’ve said consistently, forced labor and human rights abuses have no place in our supply chain,” said Magdi Batato, vice president of operations for Nestle, in a statement, as reported by The Guardian. “Nestle believes that by working with suppliers we can make a positive difference to the sourcing of ingredients.”

The rare confession from such a multinational, corporate behemoth was hailed as a positive indication of change by many human rights groups at the time — and the move was even called “unusual and exemplary” by Mark Lagon, president of Freedom House.

But the truly disingenuous motivation for Nestle’s red-handed confession was recently made all the more apparent when the Supreme Court “rejected a bid by Nestle … to throw out a lawsuit seeking to hold them liable for the use of child slaves to harvest cocoa in Ivory Coast,” reported Fortune. “The plaintiffs, who were originally from Mali, contend the companies [Archer-Daniels-Midland and Cargill were also named] aided and abetted human rights violations through their active involvement in purchasing cocoa Ivory Coast. While aware of the child slavery problem, the companies offered financial and technical assistance to local farmers in a bid to guarantee the cheapest source of cocoa, the plaintiffs said.”

According to The Guardian, which reported on the hypocrisy, Andrew Wallis, chief executive of anti-human trafficking charity Unseen UK, stated, “For me, there is a big issue with one part of Nestle saying, ‘OK we have been dragged along with everyone else to face the issue of slavery in Thailand and so let’s take the initiative and do something about it’, and at the same time fighting tooth and nail through the courts to avoid charges of child slavery in its core operations in the Ivory Coast.

“It’s easy to own up to something that has already been uncovered. By the time Nestle owned up to slavery in the Thai seafood industry it was accepted knowledge. It’ll be a brave new world when companies are actually doing the real investigation to probe into part of their supply chains that have remained outside the public domain.”

Clearly, Nestle must be caught red-handed in order to confess to any wrongdoing, as similarly seen in its Arrowhead Springs bottled water operations in the San Bernardino National Forest. Tougher scrutiny of Nestle and other mega-corporations must be imposed to hold them accountable since they apparently don’t find self-policing necessary — until their abuses are exposed for all the world to see.

This article (The Real Reason Nestle Is Finally Admitting to Slave Labor in Its Supply Chain) is free and open source. You have permission to republish this article under a Creative Commons license with attribution to Claire Bernish andtheAntiMedia.org. Anti-Media Radio airs weeknights at 11pm Eastern/8pm Pacific. If you spot a typo, email[email protected].