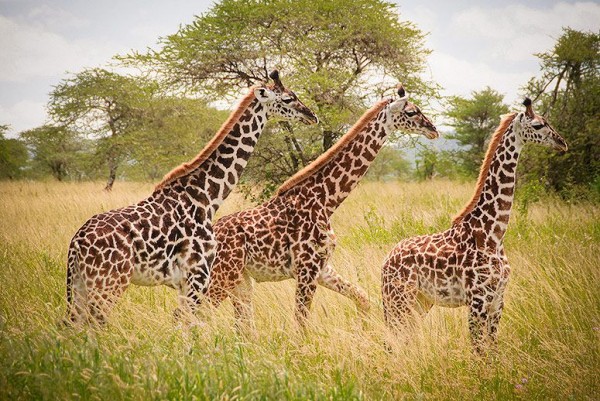 The Democratic Republic of the Congo (DRC) is a vast stretch of country in Central Africa.   It is the second largest country in Africa by area, the largest in Sub-Sahara Africa, and the eleventh largest in the world.

The country has an abundance of mineral resources. The DRC is widely considered to be the richest country in the world in terms of natural resources. Untapped raw minerals in the DRC are estimated to be worth in excess of US $24 trillion. The country has 70% of the world’s coltan, a third of its cobalt, more than 30% of its diamond reserves, and a tenth of its copper.

Aside all these, the country is also blessed with thick forests, with many wild animals. This has lead to the creation of National Wildlife Parks to protect the country’s wildlife population.

But recently, some of the major environmental issues the country is facing include deforestation and poaching. However, poaching is the major problem. In fact, it is currently threatening the wildlife populations of the DRC.

Previously, it was said poachers were interested in only elephants. But now, poachers have widened their illegal activities to include giraffes. Recent surveys have revealed that the country’s giraffe population has woefully fallen to just 38, putting the species at immediate risk of extinction.

The DRC’s giraffes all live within the Garamba National Park. The Park is about 1,930-square-mile located in the Orientale Province. It is a UNESCO World Heritage Site. The park is managed by a nonprofit organization, African Parks. African Parks said some two decades ago, the Park was home to more than 350 giraffes.

But sadly, most of the animals were killed during the DRC’s 1998–2003 civil war, leaving just 86 giraffes afterward. And after the end of the war, many of those giraffes who survived have now been lost to poachers. Only 38 giraffes are believed to be remaining in the park. And park officials have warned that if they lose just five more giraffes, the population may no longer be sustainable on its own.

This has prompted the international Giraffe Conservation Foundation (GCF) to react to the situation. GCF has announced that it is traveling to the Garamba National Park to assess the situation.

Due to the largeness of the park, it is hard for rangers at the park to constantly monitor and protect the animals from potential poachers. Executive Director of GCF, Julian Fennessy said the foundation will provide 12 of the animals with Global Positioning System (GPS) radio collars. The GPS will help with ongoing monitoring of the remaining giraffe and guide ranger efforts in their area to fight future potential poachers. Fennessy also said they will be advising managers of the park on the possibility of building a fence for better protection.

A specialist at the International Union for Conservation of Nature, Noëlle Kümpel described to the Take Part how vulnerable giraffes have become to poachers.  She was quoted as saying “Giraffes are like elephants, rhinos, and the like. They have been picked off by poachers to feed the illegal wildlife trade and impoverished local people. At the same time, their habitat has been severely and, in many areas, irreparably degraded, leaving very few trees left to sustain even this small population of giraffe”. The Garamba Park has officially classified giraffes in the park as a unique subspecies. They are known as the Congo giraffe, although that taxonomic designation is no longer favored by scientific consensus. Fennessy said the animals are members of a subspecies called the Kordofan giraffe, which also lives in Chad, Cameroon, and the Central African Republic.

Meanwhile, other conservationists have said that the Congo giraffes are not the only species being poached in Africa. Poaching has become a major problem for all giraffe species wherever they live in the continent. It is estimated that the animals have dropped by more than 40% over the past 15 years in Africa. Poachers have already wiped out many giraffe populations, and are now putting entire subspecies at risk of extinction.

This Article (There Are Only 38 Giraffes Remaining In The DRC, Conservationists Set To Save Them From Extinction) is free and open source. You have permission to republish this article under a Creative Commons license with attribution to the author and AnonHQ.com