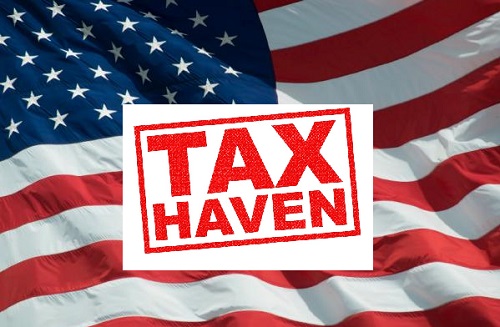 “How ironic—no, how perverse—that the USA, which has been so sanctimonious in its condemnation of Swiss banks, has become the banking secrecy jurisdiction du jour,” wrote Peter A. Cotorceanu, a lawyer from a Zurich law firm, in a recent legal journal. “That ‘giant sucking sound’ you hear? It is the sound of money rushing to the USA.”

The controversy that has made Cotorceanu and others slam the United States is the new tax haven being created for the global elite to base their riches in America. The once traditional tax haven found in the Bahamas and Switzerland are now being drowned in an agreement orchestrated by the very country who refuses to sign.

The irony, not lost on Cotorceanu, comes when the process of moving mass amounts of money into tax havens has been driven by a very familiar name in the finance sector – Rothschild & Co. On the eve of the U.S. coercing nearly 100 countries to sign the new global disclosure standards introduced by the Organization for Economic Co-operation and Development (OECD), the U.S. banking industry has opposed it.

In short, new disclosure laws in the participating countries (Switzerland included) will see stiffer standards and requirements on “bank accounts, trusts, and some other investments held by international customers,” while the U.S. remains exempt.

Rothschild and his myriad of minions have begun ushering the fortunes of the world’s elite away from the traditional tax haven, and into Rothschild run U.S. trusts that are now in the rare category of exemption from reporting requirements the agreement has bound other nations with. According to one report conducted from The Free Thought Project, international tax evasion is heavily frowned upon by the U.S. government unless it is placed into a U.S. trust account – a project “helmed” by Rothschild & Co., after their tax haven in the Cook Islands ended in 2003 following an agreement made by the then Cook Islands Prime Minister for more “fiscal transparency.”

The wealth of the uber elite can now be havened in the U.S. In Bllomberg Business, Andrew Penney, managing director of Rothschild & Co., wrote that the U.S. “is effectively the biggest tax haven in the world.” The United States in now the “new Switzerland.”

But let’s be clear on one thing: it’s only applicable to the super elite. Citizen Joe will still face court for unpaid taxes on personal income.

This Article (The New Favorite Tax Haven: Rothschild backed U.S.”new Switzerland” Status ) is a free and open source. You have permission to republish this article under a Creative Commons license with attribution to the author AnonWatcher and AnonHQ.com.