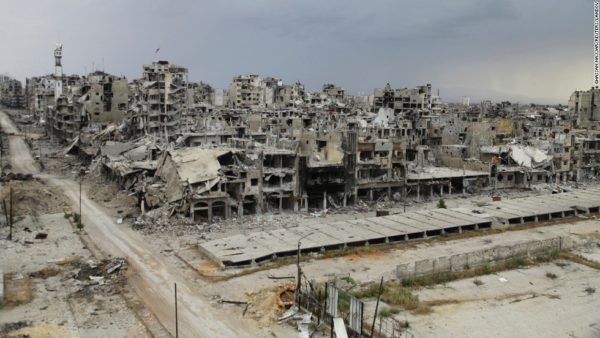 Drone videos have recorded the devastation of Syrian cities across the war torn nation.

The civil war in Syria is in its fifth year, with the war devastating the Syrian civilian population. More than half of the country’s 22 million people have been forced out of their homes. Media estimate the death toll, since the war began in 2011, at 280,000. However, after a recent United Nations special envoy to Syria, Staffan de Mistura estimated an actual death toll as high as 400,000.

In 2015, western mainstream media flooded us with pictures of fleeing refugees from the Middle East, mostly from Syria, on Europe’s borders. It is believed more than one million crossed into the continent. This year, the story hasn’t changed – war is constantly ravaging lives and land in the country. However, apart from the human cost of war, one thing many of the media have failed to bring to our attention is the level of the country’s infrastructure damage.

The Middle East, including Syria, has played a crucial role in human history. Some historians often refer to the area as “the cradle of civilization.” There are many ancient, historical monuments and artifacts preserved to this modern world. The United Nations Cultural Agency, UNESCO, has marked up to six places in the country as a World Heritage Site. This means the United Nations has deemed it of special cultural significance to the world. But because of the war, all these important monuments, sites and artifacts are being destroyed or looted. Not long ago, we published a story detailing how terrorist group ISIS has looted and smuggled important artifacts into Turkey, for European buyers.

Apart from the looting, the barrel bombs, shells and bullets from heavy weapons and machine guns have destroyed many of these important items and sites in the country.

To inspire change and to tell the world how bad the war in Syria has become, an organization known as Endangered Archaeology in the Middle East and North Africa (EAMENA) has decided to use aerial HD drone footage to show the toll of the war on the country’s infrastructure, including these ancient monuments, historical sites and artifacts.

EAMENA gathered these aerial footages from concerned media outlets who are trying to bring to the world’s attention, the level of infrastructure damage in Syria.

The multiple videos show nothing more than crumbling buildings; debris-strewn streets, and shattered windows stretch across the decimated Syrian cities and towns . In fact, the footage reminds all of us of the horrors of war. No matter how far you are from Syria, these images strike at you directly, leaving you to wonder why humans do this to each other. The footages are sickening; forcing you to admit how the human race is the cruelest and most brutal on this planet.

“When it’s so far away, it’s easy to be removed and imagine it can’t possibly be as bad as people make out,” Emma Cunliffe, an Oxford University researcher and a member of EAMENA told TakePart, in an interview.

Cunliffe also said the footages are a testament to the situation from which Syrian refugees are fleeing, as many European nations continue to decry the influx of people. In such a dire situation, there is nothing worth dying for, than to flee for your safety.

As it stands now, nobody can tell when the war will end. We can only hope for a better outcome, for Syria and its innocent people, for those bearing the brunt of this ugly war. But surely, the country has lost many of its treasures, and it will be very difficult to retrieve them. War brings nothing other than suffering.

This article (Drone Videos Record the Devastation of Syrian Cities) is a free and open source. You have permission to republish this article under a Creative Commons license with attribution to the author and AnonHQ.com.