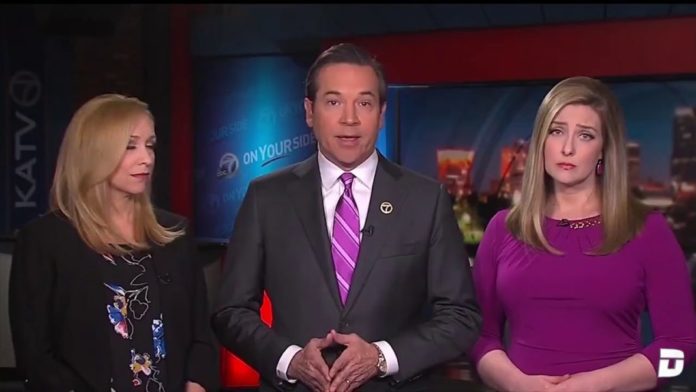 It seems exactly like someone in a position of wealth and/or influence is trying to get the mainstream media to report that some epidemic of fake news is flooding the Internet and causing panic on Earth.

The video began with clips of television news from four separate stations across the US, in which each anchor repeated a script that said “Our greatest responsibility is to serve our [insert location here] communities. We are extremely proud of the quality, balanced journalism that [insert station here] produces.”

In unison, nine separate news stations appear on the screen and the anchors all say “But we’re concerned about the troubling trend of irresponsible, one-sided news stories plaguing our country. The sharing of biased and false news has become all too common on social media.”

Somewhere around 36 news stations appear on screen by this point in the video, and at the same time they all continue: “More alarming, some media outlets publish these same fake stories… stories that just aren’t true, without checking facts first. Unfortunately, some members of the media use their platforms to push their own personal bias and agenda to control ‘exactly what people think.’”

Unfortunately, some members of the media use their platforms to push their own personal bias and agenda to control ‘exactly what people think.’”

One quite contradictory and characteristically propagandistic phrase was repeated by each and every news station:

“This is extremely dangerous to our democracy.”

As the video was titled Sinclair’s script for stations, that is basically what it is. All of those local stations share the common thread of being owned by a gigantic corporation known as Sinclair Broadcast Group. It is the United States’ largest television station operator, with over 100 markets containing around 200 Sinclair stations.

Those propaganda scripts were reportedly filmed as “promotional videos.”

CNN (ironically because this story is about mainstream media) was told by these news anchors that in addition to these identical scripts, they also were specifically given direct instructions from corporate bosses.

The anchors revealed that their big corporate boss’ instructions read:

“Please produce the attached scripts exactly as they are written. This copy has been thoroughly tested and speaks to our Journalistic Responsibility as advocates to seek the truth on behalf of the audience,” said the instructional document.

Even mannerisms and details on what each anchor should dress in were detailed in this instructional document:

“Talent should dress in jewel tones. However, they should not look political in their dress or attire. Avoid total red, blue and purples dresses and suits. Avoid totally red, blue and purple ties, the goal is to look apolitical, neutral, nonpartisan yet professional. Black or charcoal suits for men…females should wear yellow, gold, magenta, cyan, but avoid red, blue or purple.”

The anchors faithfully reciting the scripts state that it is their belief “it’s our responsibility to pursue and report the truth. We understand truth is neither politically ‘left nor right.’ Our commitment to factual reporting is the foundation of our credibility, now more than ever.”

They continue, quite falsely acknowledging that “we are human and sometimes our reporting might fall short,” and they implore the viewers to go online to the website of the station and submit their concerns “if you believe our coverage is unfair.”

However, they don’t personally answer the viewers: corporate does, as that instructional document continues “corporate will monitor the comments and send replies to your audience on your behalf.”

Because these local news stations report on small, local stories and tend to paint an image of their local, community based ways, the truth is not easy to see. Every single one of these stations is owned by a big corporation like Sinclair Broadcast Group. When an order is passed down the hierarchy from corporate, the anchors follow through. Local FOX news affiliates, ABC stations, a lot of them are Sinclair.

The full video can be viewed below: you’re going to want to see this, it may truly be the only thing you could show a family member who is indoctrinated by the media, to show them who really passes down the orders.